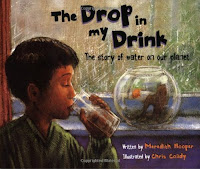 A few months ago I used this space to write about Meredith Hooper's A Pebble in my Pocket.  I was inspired by the motivating effect it had on my grandchildren -- they were outside at once, collecting and comparing pebbles, then they clustered back indoors to draw and paint their pebbles and create their own volcanos.  I bought myself a copy and felt I was closer to understanding certain basic geological facts and sequences than I'd ever been. As I read it aloud to the youngest child I admired the energy with which this dramatic story was narrated. Millions of years roll past and the pebble is formed and endures and finds its way into our pockets. I'm still amazed by this.
The Drop in my Drink is the natural sequel to the Pebble and has just been re-issued by Frances Lincoln. The challenge this time is slightly different: to express the changeableness, the fluidity and yet the eternal nature of water. "All the water we have is all the water we've always had."
It's an extraordinary concept -- can it be right? we may ask ourselves during our period of anxiety about climate change: about droughts and flood and over heating. The overall quantity of water remains the same -- where else could it go?  -- only its state changes.
The changeable nature of water inspires Hooper's imagination and consequently her language. She begins with the simple explanation that every drop of water is constantly different both from every other drop and from itself because the water molecules are always on the move. Water trickles and seeps, flows, freezes, floats. Illustrator Chris Coady supplies a contemplative image of a child watching drops from a tap splashing into a tumbler: "Where do you come from, drop of water?"
The language of the answer is gloriously vigorous. "Water dribbles down rocks. Water churns along rivers and fills great oceans. Water tumbles inside clouds, drifts as snowflakes, collects in puddles. Water creeps up the stems of sunflowers and slips down the throats of tigers."  (I especially love "tumbles".) This rush of verbs and images carries carries the reader along to the simple central statement: "It's all the same water."
In one sense that's all there is to say and the rest of the book explains and expands. Yet the sense of drama as well as the sense of wonder is never far away. We feel the paradox of the weight of water that floats above us in the sky "hundreds of millions of millions of tonnes", then we are ripped from this magical altitude and "howled" above the mountains in icy jet streams.
The sense of time and the passing of geological ages is not as powerful in this volume as in the Pebble but it's still there. Water has been the essential nutrient from the first simple life-forms, through the earliest plants to the increasingly complex vertebrates and on into the luxuriant growth of the rainforest. Continuity and diversity is the theme of the Drop and Hooper's intellectual excitement at this combination is memorably conveyed through her language as well as Chris Coady's vibrant paintings. Another great example of science writing for children which can engage and challenge adults as well.

Return to REVIEWS HOMEPAGE
Posted by julia jones at 00:30 Permalink

Sounds a very good book for inspiring imagination and wonder.