A LILY, A ROSE by Sally Nicholls. Reviewed by Ann Turnbull. 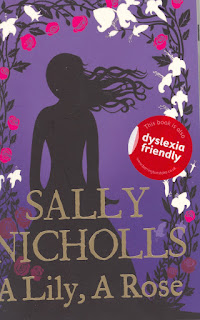 Elinor is fourteen. She's in love with her cousin Dan, and he loves her. But this is the early 1300s, and neither Elinor nor Dan can choose who they marry. Dan must marry a girl with money, and Elinor must marry an old friend of her father's, a man who is connected to the new king and will keep her and her family safe in unsettled times.

It's not easy to write a historical novel with believable characters in just 65 pages of accessible prose, but Sally Nicholls has achieved this. With some deft name-dropping (Roger Mortimer, Robert the Bruce) she places the story in time. The settings contain just enough descriptive detail to create the atmosphere of life in a medieval castle. Elinor and Dan play chess, read and learn languages, ride and hunt. They speak French with their social equals and English with their servants.

Elinor is a lively, intelligent girl. She's stroppy and she answers back and quarrels with her father, but she never seems too modern for the story. Her fury and feelings of powerlessness will resonate with teenagers of any time:

But the problem is resolved, and in a surprising way that is both realistic and satisfying, even though happiness for everyone concerned is never going to be possible.

The title comes from a medieval poem, The Maiden's Song, about a young girl on her wedding morning, and I'm glad to say that this lovely poem is quoted in full at the end.

Return to REVIEWS HOMEPAGE
Posted by Ann Turnbull at 16:13 Permalink