Anything That Isn't This by Chris Priestley review by Dawn Finch 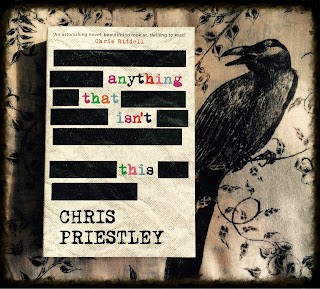 First the blurb...
Seventeen-year-old Frank Palp lives in a grim little apartment, in a grim little building, in an exceedingly grim city. This is a city full of contradictions, and Frank is no exception. He mostly hates his life, he definitely hates the ludicrous city he is forced to live in and he absolutely with complete certainty hates the idiots he's surrounded by . . . and yet he is in love. A love so pure and sparkling and colourful, Frank feels sure it is 'meant to be'. His love is a reward for all the terrible grey that he is surrounded by - which would be great, if the girl in question knew he existed. And then one day, the perfect sign lands in his lap. A message, in a bottle. A wish, for 'anything that isn't this'. The girl who wrote this is surely his soulmate - and now he just needs to find her.

Frank is as grim as the city in which he lives and is a rather pretentious self-obsessed teenager. (That sounds terrible - stick with me....) He lives under the cold grip of The Grey which he feels sucks the colour and life out of the world. He grumpily blunders through his life feeling that he has no choice, no control and no options. He hates everyone, and the people around him are gradually losing patience with him as his life is slipping past. Then he finds those glorious words that someone else wishes for "anything that isn't this" and he sees a glimmer of light at the end of the Grey tunnel.
This book is, quite frankly (no pun intended) one of the best books I've read this year. The tale of Frank, his life and his family is curiously compelling and the book is impossible to put down. I was reminded of classics such as Peake's Gormenghast, and even Walpole's Castle of Otranto, such is the detail of the Castle and the City that dominates Frank's life.

The book is visually stunning too as the text is supported by Priestley's own illustrations. These inky images drive home the chilling and suffocating atmosphere of Frank's world and provide more than just support to the text. They are an important element in the delivery of the story and I'd love to see more of them. In fact this would make an extraordinary graphic novel or animation, and I very much hope that someone is considering doing just that.

I have read all of Priestley's books, and I feel that this is his finest work to date. I am very envious of its effortless flow, cool style and Gothic elegance. In fact I only have one complaint - Chris, don't introduce me to something as completely fabulous as invisible lizards and then only give me a little bit! More lizards please.

Anything That Isn't This is published by Hot Key Books

Return to REVIEWS HOMEPAGE
Posted by Dawn McLachlan at 09:00 Permalink