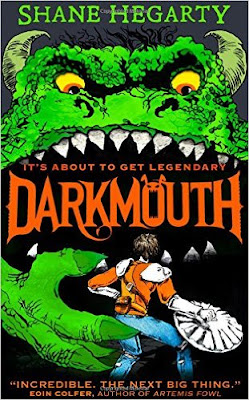 He's a young apprentice in a world of dark magic, he's destined to battle world-threatening monsters, and he's not very good at it.

It's a tale-as-old-as-time, and that's as it should be. One of my favourite things in this world (and all the others) is reworked legends, and Shane Hegarty's twist on the fabulous creatures of myth is as quirky and smart and funny as you could wish.

Finn (who doesn't have a surname – yet) lives in the Blighted Village of Darkmouth, where he and his father - Hugo the Great – are just about tolerated by the inhabitants. The village itself is a kind of nightmare combination of insular rural small-town and Buffy's Sunnydale; people with any sense can't wait to leave, and that includes the local police sergeant.

For many generations, Finn's family of Legend Hunters has protected Darkmouth and the world beyond it from the monsters – the Legends – who have a habit of slipping through the barrier between the worlds. An occasional car or boat might get crushed, but the locals can live with that so long as the minotaurs, basilisks and manticores are stopped in their tracks.

Luckily, Dad Hugo is enormously good at his job: he's practically a legend himself. This is galling for poor Finn, who has to live with the stories of his father's prowess (usually told by his father) while being thoroughly incompetent himself. All Finn wants, really, is to leave Darkmouth and become a vet. He's a sweet, clumsy but very brave young hero, and enormously relatable for any young reader.

Not only is Finn expected to graduate to full-fledged Legend Hunter like yesterday; he discovers that his father will shortly be promoted to the governing body of their order, and will be leaving Darkmouth under Finn's sole protection. Of course this has to happen just as a major Legend incursion is threatened. And Finn has to deal not just with that, but with bullies, school, and intriguing newcomer Emmie – who seems to know more about Darkmouth than she's letting on.

Hegarty sets a cracking pace, but the increasing tension and the sometimes brutal scares are nicely offset by a dry and punchy humour. Stunning illustrations by James de la Rue are a gorgeous and atmospheric enhancement to the story. It's the first book in a series, and it ends on something of a cliffhanger – but not without some satisfactory resolution to the first episode.

Any child who loved Beast Quest will be thrilled to graduate to this dark, funny and complex tale of monsters and mayhem; it will enchant lovers of myth, legend and a rattling good story. I gulped it down – appropriately enough – in a single bite. 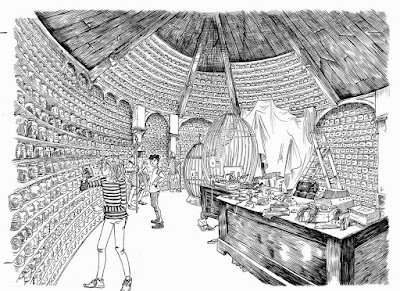