the Phoenix - The Weekly Story Comic reviewed by Lynda Waterhouse 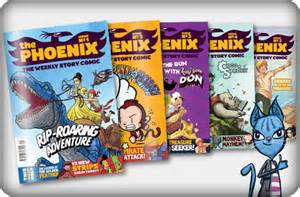 I spotted the Phoenix in WH Smith. It was surrounded by a sea of plastic wrapped, shiny pink and glittery offerings with nasty plastic gee-gaws stuck on the front to tempt you into buying them. Four words on the cover of the Phoenix tempted me –The Weekly Story Comic.
My first rather pompous thought was of Charles Dickens and his weekly instalments of stories. Then I had a flashback to the delight I felt on of the arrival of my comic every Friday. It was Twinkle or Bunty for me and Sparky or Victor for my brother. Sometimes I would treat myself to a copy of Romeo.  I also borrowed my friend’s DC Lois Lane comics. Reading them always felt like a treat. As it says on the back on the Phoenix …it’s like getting a present every week!
But what would tempt a person between the ages of 6-12 to buy this comic? They have gaming, e-books, tablets and iPads and Netflix all vying for their attention. What does the Phoenix have to offer?
Issue 204 contains Chapter Five of Saint Georgia - And the Ends of the World by Robin Boyden, an episode of Looshkin…the maddest cat in the world and Battlesuit Bea by Jamie Smart, Part five of Mega Robo Bros by Neill Cameron and Evil Emperor Penguin in :The Yay-Factor by Laura Ellen Anderson. There is a Von Doogan Danger Maze to complete with the chance of winning a prize .Jess Bradley’s hilarious Squid Bits page. The editorial team led by Tabs Inkspot and Chops Piggerton discuss if it is too early to celebrate Christmas in Tis the season…tisn’t it. There is a pull out poster in the middle, a chance to point out errors in The Ministry of Mistakes and an invitation to send in jokes and see if you can make The Guv laugh .Readers are also invited to send in their art work.
The Phoenix is a delight. It is a clever blend of what made comics work in the past mixed with a 21st century child’s cultural experiences. The variety and quality of the art work is stunning. The stories are exciting and are either truly terrifying or wildly hilarious. It has strong female characters. The production values of the magazine are high so it is pleasure to collect, store and re-read. It makes you feel valued and part of a community. There are no adverts ( apart from for books).  A subscription to the Phoenix would be the best Christmas present ever!

The Phoenix is extremely popular in one household I know, for stories and also for their varied art-work! I bought a year's gift subscription for an 8yo boy, which 10 y.o sister covets, and the envelope arriving makes a real Friday treat for them both. So successful that their parents continued the subscription. Some of the (older?) strips now seem to be bound as graphic novels - a good move!.Glad to see The Phoenix here in Awfully Big Reviews!

I didn't know you could get the Phoenix except by subscription - will see if my local Smiths has it. Thanks, Lynda.