The Sword of Kuromori by Jason Rohan. Reviewed by Tamsin Cooke

The Sword of Kuromori by Jason Rohan is such an adrenalin ride of a book and a fantastic introduction to Japanese culture. 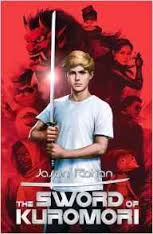 15 year old Kenny Blackwood thinks he’s going to spend the summer with his father in Japan. But even before the aeroplane lands, Kenny starts seeing strange creatures that no one else seems to notice.  And once in Japan, everyone appears to be after him – wanting him dead. Not knowing who to trust, Kenny finds himself in the middle of a war. Unless he can fulfil his destiny (he never knew he had), millions might die.

The reader is taken on a thrilling journey through Japan. Kenny is a funny likeable hero, but completely out of his depth. Luckily he befriends Kimoni, a biker girl who teaches him the secrets of Japan and how to fight! Their dialogue and relationship made me laugh so much, as did the Tanuki (the fat Japanese racoon dog who appears mysteriously at Kenny’s side).

Rohan’s love of Japanese culture shines through his writing. Having never been to Japan, I feel as though I have experienced the food, the land and met the utterly bizarre mythical creatures. There are demons in business suits and headless vampires!

I recommend this book to children of 9+ and above.  The adventure is past paced, very funny and terrifying all at the same time. He weaves ancient mythical monsters into contemporary life flawlessly.

The second book in the series –The Shield of Kuromori is already out, and I love it just as much as the first. I can’t wait for the final instalment in the trilogy. The Stone of Kuromori is out in January 2017 (tbc).

Return to REVIEWS HOMEPAGE
Posted by Tamsin Cooke at 07:00 Permalink