PRINCE OF WOLVES - Book 1 of The Legend of Genghis Khan - by Katherine A Roberts. Reviewed by Ann Turnbull. 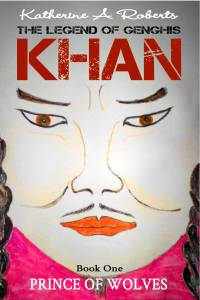 Any new book by Katherine Roberts is a cause for celebration, and this one is extra special because Katherine has written, designed and published the entire three-book project herself. Prince of Wolves is the first of three novellas, each narrated by a different character: Temujin (the man who became known as Genghis Khan), his wife Borta and his blood brother Jamukha.

Based on Mongol legends, this is a story of rival clans battling for power. Nine-year-old Temujin is betrothed to Borta, the daughter of a neighbouring chief, in fulfilment of what their fathers believe to be a prophecy in which a wolf will mate with a deer and create a great nation. The two children seem to be the pair in the prophecy - but are they? Someone throws a stone during the betrothal ceremony and, soon after, Temujin's father is murdered by rival tribes and his wives and children forced to flee to the mountains. There Temujin meets Jamukha, who becomes his blood brother.

Many trials await Temujin in the years to come before the Mongol Alliance calls him Khan and his enemies are reduced to "ashes blowing in the wind". He knows he must find followers and raise an army if he is to avenge his father and keep his family safe. But who can he trust?

This is a short, action-packed story that is hard to put down. Told in Temujin's first-person narrative, it's full of images that conjure up the landscape and people: the horse-skull violins carved and played by the shamans; the beautiful sable fur that Borta brings as her dowry; the "trembling silence" that stretches between Temujin and Borta "like the rope on a wild horse". Temujin is as violent and ruthless as a Mongol leader needs to be, and yet he remains a sympathetic character, vulnerable in his relationships with those he loves.

Anyone who liked I am the Great Horse would enjoy this book, though it's for a slightly older readership. Book 2, out soon, is Borta's story, and Book 3 Jamukha's. Available now as a Kindle e-book, Prince of Wolves will shortly be available to read on all devices, and a POD paperback may follow.

I very much enjoyed this book too!

I very much enjoyed this book too!