QUEEN OF THE SILVER ARROW, by Caroline Lawrence. Reviewed by Saviour Pirotta 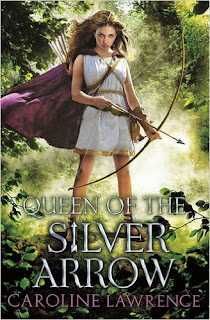 Caroline Lawrence has probably done more than any other living author to popularise ancient Rome in children's fiction. Her Roman Mysteries series starring the indefatigable Flavia Gemina needs no introduction.  It sold over a millions copies, was turned into a television series for the BBC and spawned a second series for younger readers called The Roman Mysteries Scrolls.

Her latest historical adventure goes back in time to the founding days of Rome and is based on sections from Virgil's Aeneid. It's the story of Camilla, a princess of the Volsci tribe. According to legend, and Virgil, her father Metabus was hounded out of his realm by his own people who were angered by his continous taxation. Coming to the banks of the Amasenus with the infant princess in his arms, he binds her to a spear and hurls her across the river. The baby Camilla lands safely on the opposite bank but must remain faithful to the goddess Diana for the rest of her life.

When the king dies, the growing child has to fend for herself in the forest, becoming a fearless hunter. Until one day she is befriended by a group of girls from the nearby city of Laurentum who treat her as a living legend and draw her out of the forest and on to the battlefield...

Lawrence can always be relied on to bring ancient history to life and this book hums with excitement. The authentic details of life in the ancient world, the bonding among the girls and the battles scenes with the invading Trojans are all brought brilliantly to life. This is great, fast-paced stuff that will leave the reader breathless for more.

Return to REVIEWS HOMEPAGE
Posted by Saviour Pirotta at 07:00 Permalink