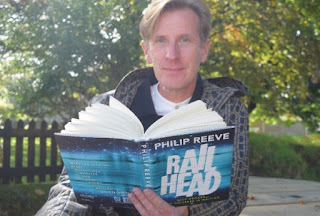 Philip Reeve is a remarkable writer, with an imagination the size of one of the many planets he writes about in this book. I've read several of his Mortal Engines books, and also his Larklight series, for sightly younger readers: and I've been lost in admiration after reading all of them, at his exuberance and inventiveness and the sheer range of his characters and the worlds they explore.

Railhead is set in this universe, but far into the future. There are knowing and funny nods back to our time; Casablanca is referenced, and ancient earth languages, including Ancient Geek and Klingon. (Who knew?) In this 'world', travel among the planets takes place by means of trains. But these are no ordinary trains: these are trains with souls, which feel joy, love, sorrow and anger. And they are not the only sentient forms which Reeve creates. There are also the Hive Monks: hybrid beings made up of lots of beetles which somehow coalesce around a flimsy framework to form the simulacrum of a human being - and the Motoriks, dismissively known as 'Wire Dollies'. These are androids, not meant to be individuals with feelings - but one, Nova, is very individual indeed. Her quest for a soul is indicated by her creation of freckles to spoil the perfection of her 'skin'; like all of the characters, human or not, she is multi-layered and we come to care for her, to respond to her warmth and complexity.

The hero of the story is - at the beginning - a small-time thief called Zen Starling. He, like many a fantasy hero, soon finds out that he has a back-story and a destiny of which he has been hitherto unaware. He is plucked from obscurity by an ambivalent master-criminal named Raven, because he is uniquely qualified to infiltrate a powerful family called the Noons and steal from them something that Raven very much wants. But, being a hero, he is not inclined to meekly fall in with anyone else's plans, and everything goes horribly wrong.

This is a beautifully written book with a story that moves along with the pace of a high-speed train. The characters are complex and varied; there is humour, there is pathos, there is love. And all this in a world which Reeve has constructed with dazzling aplomb. In his 'ThankYou', at the end of the book, Reeve pays tribute to Sarah McIntyre, with whom he has written books for much younger readers: he says that she 'made me want to write more stories at a time when I felt ready to give up.' We must be very thankful to Sarah for this - because if this writer gave up, it would be a desperate waste of an extraordinary talent.

Now THAT is a book that I'm longing to read and to give to certain small people. I'm a huge fan of Reeve's work already - but I hadn't spotted that this title was about. Thanks, Sue.