THE NOWHERE EMPORIUM by Ross MacKenzie: reviewed by Gillian Philip 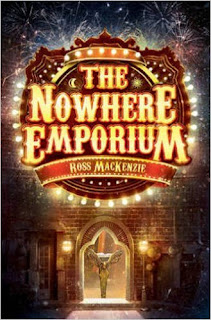 Every town has at least one: that little row of shops that you barely even look at, that you almost forget about till you need a pint of milk late on a Monday. You always think of them behind a haze of grey drizzle – so imagine if you were driving by one day and one of those shops, though built of midnight-black bricks, was suddenly glittering and sparkling in the light. What's more, it's the one that wasn't there before. Because weren't there four shops there yesterday? So how come there are now five?

Ross MacKenzie has created a delicious and fantastical concept in his Nowhere Emporium, a shop that travels through space and time and (much like that other famous Time Machine) is a lot bigger on the inside. In fact, since it's powered by pure imagination, this particular store interior would appear to be limitless. 'Bring Your Imagination!' demands the invitation – presented in glittering fireworks in the sky above the shop – and that is the only price of admission: a little piece of each customer's imagination, and one that will eventually grow back. So where's the harm?

Daniel Holmes isn't sure. An orphan who stumbles upon the Emporium while being chased by bullies from the children's home, he is immediately entranced by both the shop and its owner, the mysterious Lucien Silver. When Silver offers him a job, he barely hesitates; there's no competition between a magical travelling emporium and his grim and loveless life in Glasgow.

All the same, he's the kind of boy who asks questions. Lucien Silver has taken him on (a little reluctantly) because Daniel clearly has gifts, among them a vivid and extensive imagination. So Daniel is dangerously curious about the potential of the shop – where a new room is created for every flight of imagination in a magical book – and about the price required to keep it in existence. Who is Lucien Silver running from? Why is he so afraid, he simply vanishes into thin air one day? And who is the girl who haunts the rooms of the Emporium like a ghost?

There's an abundance of mystery, excitement and magic as Daniel hunts for the answers. Any young hero worth his salt is going to make a few mistakes along the way, and Daniel's errors of judgement have quite terrifying consequences – but there's never any doubt he has the nerve and the determination to see the adventure through. Even when the Emporium itself becomes a crumbling, deadly trap...

In The Nowhere Emporium, Ross MacKenzie provides everything it takes to keep a young reader enthralled – magic, mystery, an intrepid hero, his colourful allies, and – best of all – a chilling and lethal villain. A magnificent cover by Manuel Sumberac is bound to entice the reader: once you're through that cut-out entrance, as with the magical gates of the Emporium itself, there are wonders enough to fire any imagination.

I can't help giving that ordinary little arcade of shops a second glance on my way home, though. After all, it's not as if I'd remember...