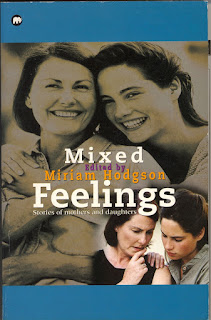 This collection of short stories about mothers and daughters was first published in 1992 and is still just as lively and relevant today, despite the absence of such things as mobile phones and selfies.

The themes are timeless. Ten favourite authors explore those early teenage years when girls grow up quickly, to the alarm of their mothers, and begin to form their own ideas and tug at the constraints of home.

In Anne Fine's opening story, the unnamed narrator begs her mother for a story she's heard many times before: how her mother came to be born. It's a brilliantly funny and involving story that tells much in a few pages, and it touches on the timeless themes that echo throughout the book: birth, first love, independence, finding out who you are and where you came from, and the unbreakable bonds between mothers and daughters.

Here we have rebellious daughters (from the first nudges of independence shown by Berlie Doherty's Jenny to the desperate struggle of Jamila Gavin's Nasreen), unconventional and embarrassing mothers, schoolfriends, boyfriends, people in the workplace. Above all there is the tension between the powerful urge to fly the nest and the pull of home.