Shakespeare and his Stage by Marchette Chute review by Lynda Waterhouse 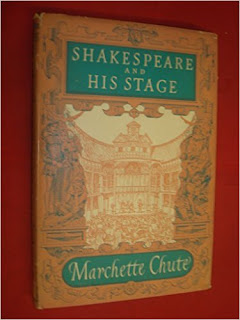 I was intending to review one of latest books about the bard ; Michael Rosen’s or Andrew Donkin’s The Weird World of William Shakespeare but my heart kept tugging me back to Marchette Chute’s Shakespeare and his Stage and so Hamlet-like  I changed my mind.
I love Horrible Histories and I know literally hundreds of children who do but my serious inner ten year old child also craved something else.
I had stumbled upon Shakespeare and his stage a few weeks ago in the Amnesty Book shop in Newcastle. My copy had once belonged to Whitley Bay South County Primary School and was the third impression from 1964.
The blurb on the cover of this slim volume sets out its stall; the aim of this lively book is to recreate for the reader the Elizabethan world of the theatre in which Shakespeare lived, and for which he wrote his plays.
The book is written in chapters and reads like a novel. There is only one illustration in the book but the power of Chute’s prose and her ability as a storyteller paints a vivid picture of the theatre and Shakespeare’s life and work.  The book also provides a description of his plays, poems and songs.
‘In that age of great singing voices, Shakespeare’s was the greatest. And even at the close of his career, with its weight of experience and knowledge of evil, he could still write like a young poet who had never known anything but spring.’

Your blog was absolutely fantastic! Great deal of great information and this can be useful some or maybe the other way.
Cheap Dissertation Writing Service |
Cheap Assignment Writing Service

A nice find, Lynda. One can certainly discover treasures within second-hand bookshops!

Shakespeare is a great writer in history and to something on his life is a great honor. Keep updating your blog, anticipating getting more detailed contents. Just reading this I felt more relaxed. Great work! Cheap Dissertation Writing Services