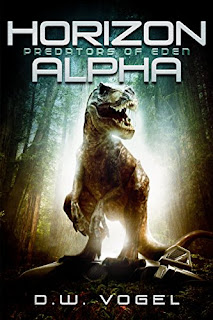 Dinosaurs in space. DINOSAURS IN SPACE!

I could just leave my review there, because let's face it, that is an awesome enough premise, but that would be doing this book a great disservice. The book opens as our protagonist Caleb sets out on a dangerous mission; but there's some unsettling history to the way his small human community met the dinosaurs.

The calamity that has destroyed Planet Earth is, for once, not the consequence of humanity's misdeeds: it's simply a giant cosmic accident. Mercury wobbles in its orbit; Jupiter's gravitational pull alters; Earth's scientists realise they have eighty years to save what's left of humanity. And that's it. From that terrifying moment, it's been a race against time to build four Horizon spaceships that will carry a small sample of humanity to distant, unknown worlds. One of the ships, Gamma, never gets out of the solar system; on the others, generations live and die without setting foot on solid ground.

Horizon Alpha is the first to reach a habitable planet, Tau Ceti e. Horizons Beta and Delta are still somewhere out there, our narrator Caleb assumes: still speeding across unimaginable distances in search of a home. That's a melancholy enough ghost in the story, but because of an explosion as the shuttles are loading, Horizon Alpha is left a wreck in space. Now it orbits Ceti, a spectral and eerie presence that Caleb can't forget – not least because his own father died there, saving as many as he could.

The sheer desperation of the survivors makes this book a nerve-shredding fight for survival from the outset. They're not well-equipped; they have no means of escape; they simply have to endure, and scavenge what they can from the planet's surface and from the wreckage of other shuttles. They can't even be sure of keeping their camp's protective electric fence powered up. And boy, do they need that electric fence...

The creatures that live on this planet aren't Earth dinosaurs, Caleb emphasises; they're what evolved on Ceti instead. Some of them are exactly like ours (what's a dinosaur story without a T-Rex or two?); others are monsters that are entirely native to Ceti. And what monsters – the highly intelligent and terrifying 'Wolves' (called that only because they're grey, and hunt in packs); the motionless, apparently somnolent Crabs, which lie perfectly camouflaged till they lunge to snap a traveller in two; Gilas, creatures that only have to bite once...

The dinosaurs clearly can't be allowed to breach Eden's fence; so fifteen-year old Caleb (who has already lost a brother as well as a father) is chosen for a military sortie, to retrieve a prized power core from a crashed shuttle. Of course, too much can go wrong on this planet; for the mission's own shuttle flight, it goes quickly, violently wrong. Only six members of the party survive the crash.

The good news: they swiftly find the old shuttle wreckage and its precious power core. The bad news: they have to make their way back to their settlement, Eden, on foot and with barely any supplies. And given the hostile environment of Ceti and its native fauna, the expedition becomes a classic, nail-biting, And-Then-There-Were-None horror story.

I was gripped throughout. Caleb has courage – it wouldn't be possible to have survived on Ceti this long without it – but he knows his shortcomings, and he is terribly afraid. His brother vanished on a similar mission, and Caleb is desperate not to become another lost son for his mother to grieve. That makes him cautious to begin with, and the reader can sympathise. The terror only increases as they get closer to Eden, and there are plenty of obstacles, inanimate and living, that threaten to stop them dead. But Caleb's is a classic Hero's Journey, and when things get critically worse, he knows he has to find it in himself to save what's left of their party.

The characters can't help but be sympathetic, given what they're up against – and what they're fighting for, which is the highest possible stakes. They're all individuals, vividly drawn, and you root for every one, from the gruff and competent General Carthage to the eager but nervous naturalist Sara Arnson. You want them all to get out alive. You know perfectly well that won't happen.

D.W. Vogel puts a great deal of care into the technical, natural and scientific detail; the Tau Ceti e ecosystem makes sense, and so does the history of humanity's remnants. There are no laser guns for fighting off alien creatures; humanity didn't have time to invent them. This is a down-and-dirty, desperate fight for survival against impossible odds; The Walking Dead, but with dinosaurs.

The story ends not on a frustrating cliffhanger, but with a development that the reader desperately wants to follow through to its consequences. I'm on tenterhooks for the next instalment.


(currently available only as Kindle edition in the UK)


Return to REVIEWS HOMEPAGE
Posted by Gillian Philip at 00:10 Permalink

Sounds such an interesting series! I'm sure that the right reader will love these books.