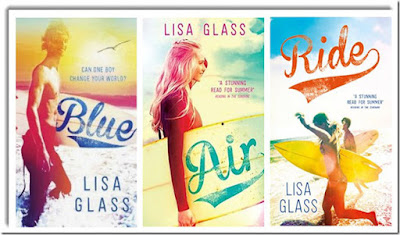 "As a professional surfer, seventeen-year-old Iris has travelled the sun-kissed beaches of the globe. But after a tumultuous week in Miami leaves her heartbroken, Iris returns to her home town in the south coast of England. Putting her promising career on hold. Leaving behind Zeke, the boy who changed her world. Iris is desperate to get back to her old life, to the family and friends she grew up with. She wants to rediscover her passion for surfing. She needs to move on.
But Iris soon realises it won't be that simple. Because while a summer romance might only last the season, first loves never truly leave you."

Ride is the third and final book in Lisa Glass' surfing trilogy and sees an emotionally-battered Iris returning to her roots in Newquay. Things have moved on in the time she's been gone; her mother has a new relationship, her best friend is the same but different and her ex is engaged to someone else. Only one thing remains constant and that's the sea.

Iris struggles to find her place in Newquay again. She's a celebrity now, the very definition of a local girl made good in a town where professional surfers are rock stars: she's different. And as well as having to cope with the changed perceptions of friends and acquaintances, Iris also has to deflect questions from her loved ones - where is Zeke? Why isn't he with her?

Unwilling to admit the truth, even to herself, Iris lets her emotions overrule her head. She makes some mistakes and has to live with some unpleasant consequences. And every time she surfs, she is reminded of Zeke. The upcoming must-win competition hangs in the balance as Iris loses her edge on the waves. And then she sees Zeke again...

Ride is another perfect summer read from Lisa Glass - I was instantly transported to the beaches at Fistral, Tolcarne and Lusty Glaze in Cornwall. I was impressed at the way Cornish dialect rolls off the page too - not in an intrusive way; readers might not even notice if they don't know the speech rhythms and phrases, but for me it gave the story an added layer of authenticity. I heard Cornwall in every bit of dialogue.

The delicious Zeke is absent for most of the story, but he's written in so cleverly in flashbacks and conversations that I felt he was just off the page, ready to walk in at any moment. Iris herself is a fabulous strong MC and I loved seeing her grow and change. This book is also very much about the value of friendship and I enjoyed the way these were shown: I especially want a best friend like Kelly! Ride doesn't shy away from physical relationships; there's more sex than ever, which is only right as Iris matures and grows up. It's not all romance - there's plenty of drama and of course lots of fantastic surf detail. Be warned, though; the climax of the book will have your heart racing for an entirely different reason - it had me on the edge of my seat. Lisa Glass certainly knows how to end a chapter on a cliffhanger!

I would recommend this YA book for 14+. Published by Quercus, available now!


Return to REVIEWS HOMEPAGE
Posted by Tamsyn Murray at 07:00 Permalink