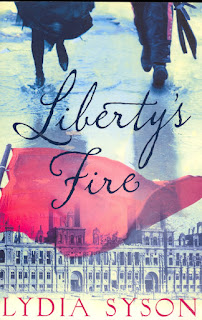 In this powerful and complex novel Lydia Syson brings to life the three months of the Paris Commune of 1871.

Four young people living in Paris come together in a story of war, revolution and comradeship: Anatole, a violinist, shares an apartment with Jules, an American photographer, and pays for his room by modelling for photographs; Marie, a colleague and friend of Anatole, is a beautiful young singer at the opera, hungry for success and anxious about the fate of her soldier brother. Into their lives comes Zephyrine, who used to work for a living but is now destitute.

When we first meet Zephyrine, she is on the brink of prostitution as she attempts to earn some money to pay for a proper funeral for her grandmother who, like many others, has died of starvation during the siege of Paris. She is rescued by Anatole, and their growing love for each other forms the core of the first half of the book as Zephyrine draws Anatole into the heart of the city's revolutionary fervour.

Although the rise and fall of the Commune is a dramatic setting, it's the characters in this story who make it so compelling that you become desperate to know what will happen to them. In particular, the subtle interplay of relationships and unspoken feelings between Jules, Anatole and Zephyrine are described with delicacy and care and without a false note. I love all Lydia Syson's novels but I think this one is my favourite because the characters are so interesting. Add to that the bohemian lifestyles and the excitement of the people's uprising and you have the perfect mixture.

This is historical fiction at its best: opening a window on the past and showing a moment that has echoes and resonances with our own troubled times.

It sounds absolutely wonderful. I shall go and buy it. Thank you!