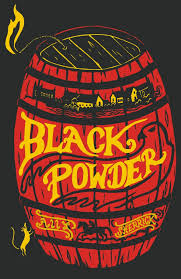 This is Ally Sherrick’s first novel and it is a sparkling debut. Black Powder is set in the year of 1605. There is a new king on the throne, King James, and English Catholics hope that he will be more tolerant towards them but there are also fears about what Robert Cecil and his ring of spies are up to. These are dangerous times to live in especially if you are, like twelve year old Tom Garnett, a Catholic. The opening paragraphs illustrate the real danger and dilemmas that Tom faces as he goes to fetch water,
The hangman stood hunched at the top of the wooden scaffold like a hungry black crow. A mob of screaming gulls wheeled above him, but his eyes stayed fixed on the noose as it swayed to and fro in the cold sea breeze. Tom’s heart jolted. He didn’t want to watch a man die, but if he ran away now everyone would know he was a Catholic for sure.
Trouble comes closer to home as his father helps a priest escape and Tom is forced to betray his whereabouts in order to save his mother and younger brother. He sets out on a journey to free his mother and rescue his father. He visits Cowdrey House, his mother’s family home – the seat of the powerful Montague Family where he meets the feisty Cressida.
Along the way he also teams up with a mysterious stranger called The Falcon who promises to help him save his father in exchange for help with his plot to destroy Robert Cecil. But nothing is what it seems. There are truth, lies, spies and compromises everywhere. Tom, aided by Cressida and his pet mouse, Jago, face danger as the plot thickens and we get closer to the fifth of November. Will sparks fly?
This is both a fresh retelling of a difficult period in history and its themes are also relevant for young people today. Is it possible to see clearly when you are surrounded by hatred?
A cracking thriller with heart.
ISBN978-1910655-26-9

I'm looking forward to reading this!

I'm looking forward to reading this!

So glad you enjoyed it, Lynda and thanks so much for the positive review! It has made my Tuesday!

What a well-chosen review. This book sounds an excellent historical adventure, Lynda.