When I saw a copy of MARIANNE DREAMS re-issued in the Faber Classics imprint, I had to buy

My curiosity about this heard-about but unknown, “classic” book was increased by the attractive cover, the slightly squat and chunky shape and the generous font and layout. MARIANNE DREAMS was inviting: a  pleasure to hold.

The story seems quite simple. Just as Marianne is looking forward to the summer, she is struck down by a serious illness. Because the doctor insists Marianne must stay in bed for six weeks convalescence, her mother arranges for Miss Chesterfield, a kind of "governess", to give her lessons.

One day, rather bored, Marianne opens her drawing book and, using a special silver-topped pencil, draws:
“a house with four windows and a front door. . . she drew a fence round the house and a path leading from the front door to the gate . .  . (and) flowers inside the fence and all around she drew long scribbly grass . .  .waist-high, at least . . and outside the fence, a few large, rough-looking stones or lumps of rock.”

Later, as Marianne falls asleep, she dreams she is walking through a strange empty house. When she wakes, Marianne realises that the house in her dream was the house she’d drawn. Not liking the empty feeling of the house, she decides to draw a boy’s face, looking out of one of the upstairs windows, Inevitably, in yet another dream, meets Mark, the boy she has drawn, right down to having one leg thinner than the other because she hadn’t drawn him well enough.

Gradually, as the dreams recurr, Marianne discovers that "dream" Mark is an invalid too, barely able to walk, and that he is also a pupil of Miss Chesterfield, “her” new governess. Marianne starts drawing useful things that are needed in the eerie dream house but although the children get to know each other, their relationship is often prickly. Mark himself seems unwillingly trapped in Marianne's dream but unable - or too ill - to do anything about his situation..

There is a very big falling out. Wanting to be liked, Marianne has spent all her pocket money on a few expensive roses for Miss Chesterfield on her birthday, However, while waiting, Marianne hears that not only has Mark given their governess with an enormous bouquet of the same flowers but that Miss Chesterfield won't be visiting her that afternoon.

Marianne completely loses her temper with Mark and with her pitifully few roses. In a jealous rage, she scribbles strong dark lines across the windows of the house, and puts some tall stones outside the fence, giving them dots for eyes, as shown in the child-like drawings within the book.

When Marianne dreams again, she finds a much-weakened Mark. His room is now darkened by puzzling bars that criss-crossed the window and he feels that the stones outside have begun watching him.

Worse, Marianne hears the real-life Mark is now in a hospital ventilator machine and the eerie dream steadily develops into a nightmare. The stones are threatening the children, trying to get inside the dream house, although it is never clear why or to what end. The illogical but inevitable quality of the dream greatly adds to the tension.of the tale, and how can the pair escape when  they both feel almost powerless?

Gradually, with the help of The Pencil, Marianne decides to draw things that will help Mark grow stronger, both in the dream and - according to various reports from the grown-ups – in his real life too. Finally, with Mark-in-the-Dream better in health and spirits, the pair make a desperate cycle-ride towards the lighthouse and to freedom. Marianne herself is left on a gentle cliff-hanger of an ending, possibly best suited to a dream.

MARIANNE DREAMS has a truly mesmeric quality, reminding me of the anguish of trying to solve problems you only partially understand and the powerlessness one feels when trapped within a recurring dream. Catherine Storr is also accurate about the annoyance of being ill and stuck in bed – as was prescribed in the past - and how that feeling can often make people behave badly. MARIANNE DREAMS might be fantasy, but it felt based on firm emotional ground.

Originally published in 1958, MARIANNE DREAMS does show both its age and social context, although the writing is admirably clear. The book would have been written around the time of a polio epidemic, when there were scary news items about children suddenly struck down and kept alive by the use of an “iron lung”. All this would have been familiar to Storr as she herself had been a Senior Medical Officer in the Middlesex Hospitals Psychiatric Department, and this book is definitely strengthened by a deep knowledge of illness and psychology.

I am glad that the book was re-issued, and I missed out on it first time around, but I am honestly not quite sure who I would recommend MARIANNE DREAMS to, other than KS2 and pre-teens who like different books and any adults who read it in the past. The steady pace is unlike any modern “busy” fantasy, the ending is more dream-like than fully resolved and there is no “romance” in the relationship between Marianne and Mark. Yet Storr has created a ghost story without any of the traditional horror but one that is scary enough in its own right: there is a memorable sense of  suspense as the reader experiences the strongest sense of being trapped with Marianne inside her darkening dream.

The book has been made into a tv film, into an opera, and interpreted in drama. Here's the publicity video of a production some years ago in Dublin that gives a good sense of the feeling one gets reading the book. I hope the play did well. https://www.youtube.com/watch?v=MDL2zrPXfnY

Catherine Storr also wrote the popular CLEVER POLLY AND THE STUPID WOLF series, which makes quite an interesting contrast! 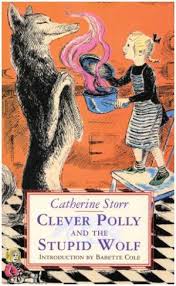 
Return to REVIEWS HOMEPAGE
Posted by Penny Dolan at 15:10 Permalink

I remember reading Marianne Dreams as a child and finding it quite disturbing, but also fascinating. Not sure whether it's one I want to revisit. The Polly and the Wolf books, by contrast, I only discovered as an adult and I love them!