The Book of Storms, by Ruth Hatfield: reviewed by Sue Purkiss 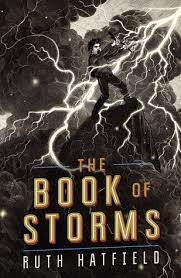 First, a warning: this is the first part of a trilogy, and the third part isn't out till November.

This is a highly original fantasy, about Danny, whose parents are obsessed by storms. One night they go out to track a particularly powerful one - and they don't return. When Danny ventures out into the garden looking for them the next morning, he finds that an old sycamore tree has been struck by lightening, and his eye is caught by a small stick which, though it's lying in the centre of the debris, is curiously unburnt. He picks it up - and finds he can hear the voice of the dying tree - and the voices of every other living thing, too...

The world the stick opens up to him, the strangeness of the events surrounding his parents' disappearance - and the fear that there might be trouble from social services if they find out that his parents left him alone - he is 11 - in the middle of the night: all these things convince him he must find his parents himself.  He finds clues in some notes made by his parents, and becomes convinced that he needs a certain Book of Storms, which is in the possession of an old man called Abel Korsakof who lives not too far away.

And so it begins. The reader finds out, quite a while before Danny, that the enemy of the piece is Sammael - who is a quite extraordinary creation. He's described as a demon - but he's not a typical demon; he doesn't breathe flames or have cloven hooves. He does do Faustian-type deals though - with, among others, Abel Kosakof - offering people what they most want in return for their souls, or 'sand'. He does, though, have a dry sense of humour, which I rather liked. And he's fond of his dog, though he doesn't treat her well. But there's no denying he has it in for the human race - and when Danny starts to get in his way, things turn very nasty, both for Danny and for those closest to him.

I found this a really powerful read. It's very well written: the fantasy world, and its relationship with the real world, become entirely convincing. The second book, The Colour of Darkness, is equally strong - though the new character, Cath, is so resilient and determined that she makes Danny look a bit of a wimp. When I'd finished the first two books, I immediately went to download the third - and teeth were gnashed when I found out that it doesn't come out till the autumn.

Just a word of caution - although Danny and Cath are 11, the trilogy is definitely not middle grade: this is not a happy-ever-after fantasy. There is death and violence, perpetrated by real-life characters as well as by fantasy ones. The covers are dark, and so are the stories. I'm hoping for a happy ending, but I'm not convinced I'm going to get one! But then, The Lord of the Rings also has a hefty share of darkness, and in that too, while good ultimately triumphs, it's at considerable cost.

Ruth Hatfield is a very talented new writer, and I look forward to seeing what she will produce next.

I have a copy here,waiting to be read. Very excited about that now. Useful point about the age of the protagonist and the age of the reader - not for me, might I add, but for when I pass it on!