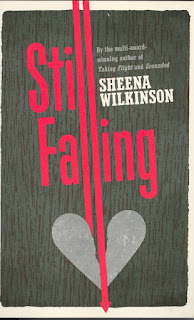 "The rain was still falling, but the darkness had parted..."  This quote from F. Scott Fitzgerald's The Great Gatsby illustrates the themes of Sheena Wilkinson's moving story of teenage love.

Troubled Luke has been in care for several years. He moves to Esther's school - a challenge for him, as standards are much higher there and he struggles to keep up. Luke is insecure and suffers from epilepsy. Esther feels like a misfit among the girls at school. But when Luke has a fit on his first day, she is the one who knows how to help him.

Esther and Luke instantly connect, and Esther falls in love. But Luke has secrets in his past that threaten their relationship, and she can't understand what it is that troubles him, and blames herself. Both young people have a fragile self-image. Can they overcome their troubles and find a way through to love?

Sheena Wilkinson's writing has a beautiful clarity and freshness, the dialogue is convincing, and the main characters have such a strong emotional presence that it's impossible for the reader not to connect with them and care deeply about what happens to them. The adults - in particular Esther's parents and the couple who become Luke's new carers - are interesting, rounded characters in their own right. The story is perfectly paced and revealed. You won't want to put it down.

Completely agree! This was my favourite book of 2015 :)