The Girl Who Drank The Moon, by Kelly Barnhill, reviewed by Sarah Hammond 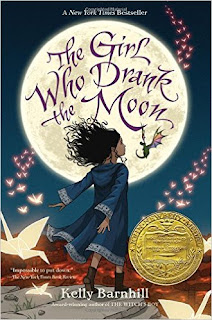 I intended to review another book for my post today, but once I read the first pages of The Girl Who Drank The Moon, I was side-tracked. Perhaps entranced.

This fast paced, middle grade fantasy deftly weaves together multiple storylines as a girl brimful of moonlight and magic, an ailing witch, a scar-faced carpenter, a swamp monster poet, a madwoman and a tiny dragon are pit against a magician who cultivates and feeds on sorrow. By the time I finished reading, I felt as if I, too, had swallowed a little starlight.

Each year, in order to appease the Witch, the youngest baby in the Protectorate is left for her in the forest by the Elders. ‘Sacrifice one or sacrifice all’ say the sorrowful people. Or so they have been led to believe. In fact, the Elders encourage this practice to keep their people frightened, sad and compliant. Yet, this, we learn, is not the full story either. For there is a Witch in the woods, but she is perplexed by the annual baby-leaving rituals. Xan is kind and chooses not to judge. Rather, she takes the abandoned babies and gives them to caring families on the other side of the forest, sustaining them en route with starlight.

One day, however, Xan makes a mistake. Instead of feeding the latest baby starlight, she feeds her moonlight. “There is magic in starlight, of course. This is well known. Moonlight, however. That is a different story. Moonlight is magic. Ask anyone you know.”

Xan calls the 'enmagicked' baby Luna, decides to keep her and become her grandmother. Yet as Luna approaches her thirteenth birthday, when her magic will flow fully, other forces are at work. A carpenter enters the forest to hunt the Witch and stop the sacrifices. Luna’s mother, driven mad with grief, escapes to find her daughter. Xan goes to rescue the latest abandoned child. Her friends, the swamp monster and tiny dragon, follow Xan, worried about her deteriorating health. Fast-moving to the end, sorrow is defeated and love triumphs.

At one level, this is a gripping story with well-developed, memorable characters. Traditional fairytale motifs are woven inventively into the plot. Yet at another level, the poetic language, the hopeful and wise themes threading through the story hint at something deeper. Madness unlocks a way of discovering nuggets of magic in the world. One generation fills the next with magic as their own gently dwindles. Beyond death, there is nothing to fear. Beyond magic, there exists a oneness from the beginning of the world.

The Girl Who Drank The Moon won the Newbery Medal, 2017.


Return to REVIEWS HOMEPAGE
Posted by Sarah Hammond at 00:11 Permalink

Sounds as if this book has got all the "magic" ingredients just right - especially with that Newbery Medal as an additional recommendation. Thanks, Sarah.