If you're looking for a present for a ten year-old grandson - as I was the other day - there are two obvious reasons for choosing this book, instead of one of the many books with 'boy' in the title which seem to be the current 'thing'. (Beetle Boy, Monkey Boy, Ice Cream Boy... at least one of these isn't made-up, but trust me, there are loads more real ones.)

The first is that it's by Terry Pratchett, so it stands a good chance of being funny, fantastical and magical. The second is that it's a collection of short stories - so handy for bed-time reading, when it's been a long day and everyone's sleepy.

Above and beyond this, if you're a Terry Pratchett fan, this book is fascinating. Written by a teenage Terry Pratchett when he was a junior reporter with the Bucks Free Press, the stories for young readers, which appeared each week, foreshadow the ideas and themes of his later work
. 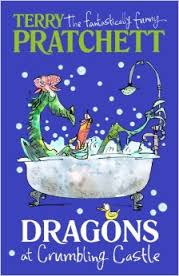 In the title story, King Arthur receives a report of dragons attacking a castle. Finding that all his knights are engaged elsewhere, and much too busy eating his breakfast egg to go and sort it out himself, he sends young Ralph, who cheerfully trots off on his little donkey to see what's going on. Along the way he encounters various individuals who become companions, including the fearsome Black Knight (who turns out to be just a little man in a big suit of armour), and a wizard called Fossfiddle -: He had the normal wizard's uniform: long white beard, pointed hat, a sort of nightdress covered in signs and spells and long floppy boots, which he had taken off, revealing red socks.

Does he sound familiar? Of course he does. He's clearly an early prototype for all the later wizards of the Unseen University - just as Ralph is the forerunner of heroes to come - unassuming, even a little weedy: but blessed with a combination of good sense, quiet determination, and a clear sense of what's right.

Other stories play with the notion of parallel worlds, which he uses to comment on the vagaries of the dominant species on this one. For instance, The Great Speck concerns the adventures of the inhabitants of a dust mote - one of those tiny specks you see floating in the air. This miniature world has two rival countries, Grabist and Posra. Each has an astronomer, and both of these spot that another, rapidly approaching dust mote shows signs of life. Everyone is astonished - no-one had believed that other dust motes could support life - and the astronomers are fired off in rockets to investigate. They accidentally take with them the rulers of the two countries. What's the first thing the rulers do when they arrive in the new world? They start to squabble over who's going to rule it.

But the collection is not just interesting in relation to Pratchett's later work. Even as a teenager, he knew how to tell a story, and these are funny and entertaining in their own right, and for the audience for which he originally intended them - children.

I love this book!