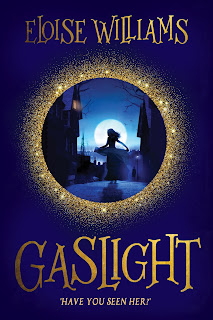 Gaslight is a deliciously dark Victorian tale set in Cardiff in 1899.  The story is told by a feisty fourteen year old foundling who has many parts to play; sometimes she’s thieving Tilly Thomas, or she’s on stage performing as Ruby Radcliffe but mostly she’s Nansi, ‘The Mysterious mermaid.’ Five years earlier Nansi had been found at the docks in Cardiff ‘lying like a gutted fish at the water’s edge’ with no memory and a missing mother.
Nansi had been rescued by Sid and now lives in a dank cellar below the Empire Theatre with her only friend Bee for company. She is desperately searching for clues about her mother but is getting nowhere. Sid is no pantomime villain, when he hits you it hurts and absolutely nothing gets in the way of what he wants.
Everything changes when Constance and Violet join the theatre.  Nansi is forced to be part of Violet’s phony psychic act. Constance, a magician’s assistant shares her cellar and appears to offer Nansi friendship and laughter.  Nansi overhears a conversation between Sid and Constance which has life changing consequences for everyone.
I particularly liked the depiction of the backstage life of a Victorian theatre with its many dark corridors, trap doors and stage hands like Gassy Jack. We also see  Cardiff  docks through Nansi’s eyes and nose, ‘The sun had cooked the smells already and I’m surrounded by smoke and fish, salt and baking, mud, bodies and grime.’
The plot moves along at a cracking pace as Nansi races against time to find her mother. Will she escape the ghosts of her past and be free to write the story of her own life? You’ll have to read it to find out. Anne Glenn’s cover design beautifully captures the essence of the story.
ISBN 9781910080542
Firefly Press