The Sleeper and the Spindle by Neil Gaiman, illustrated by Chris Riddell, reviewed by Sarah Hammond 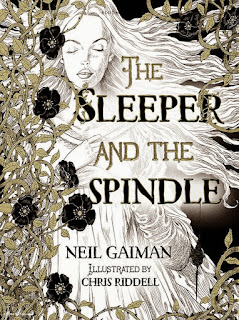 Opening up a new Neil Gaiman book is always a treat, but I was curious about reading The Sleeper and the Spindle. How would Gaiman play with traditional folktales and make them interesting and new? As you might have guessed from the title, Sleeping Beauty is the basis for the story. But, there is a twist or two.  One of the protagonists is a queen who has striking resemblances to another fairytale character. She has dwarves for friends, does not seem too keen on her stepmother, once slept for over a year in a glass coffin, and has skin that, in a certain light, seems as white as snow.

The Sleeper and the Spindle is a story of heroines. Princes are nowhere to be seen in providing happy ever afters. The queen hears of a terrible new sleeping plague spreading across her neighbour’s kingdom, who incidentally happens to be a princess who has been slumbering under a spell for some eighty years, so that birds fall from the sky mid-flight and whole towns of people sleep ‘… in their smithies, at their awls, on milking stools.’ Awful as this is, the plague gives a welcome excuse for the queen to ditch her fiancé on the eve of their wedding, don her armour and ride off for adventure to save her kingdom.

While Gaiman gives a nod to traditional folktale conventions — 'Names are in short supply in this telling’ — he also adds other modern flavours. Creepily, the cobwebbed sleeping multitudes affected by the plague speak in unison and lumber after the living, reminiscent of zombies. It is the queen, not a prince, who wakes the sleeping girl with a kiss.

We are also challenged to think about identity. How much choice do we have about who we are or what we do? When we first meet the queen, she is contemplating life without choices after her imminent marriage: '..the path to her death, heartbeat by heartbeat, would be inevitable.' Interestingly, many of the main characters do not use their own names: one name has been forgotten; others do not want to share theirs publicly; many are simply referred to by their titles (Her Majesty, the sot, the pot-girl). In fact, Gaiman sets up our understanding of who-is-who early in the book, only to challenge our guided misconceptions later in the story.

The artwork embellishing the book is magnificent. Chris Riddell uses a black-and-white palette with a hint of gold in a style inspired by art nouveau. The intricate detail of the illustrations — creeping claustrophobic vines, cobwebs and expressive faces of the characters — are hugely atmospheric and weave their own story around the written tale. The book was a deserved winner of the CILIP Kate Greenaway Medal 2016.


Return to REVIEWS HOMEPAGE
Posted by Sarah Hammond at 02:27 Permalink

I've seen that this book is out there, Sarah, but tend to skip over the early publicity articles, so I'm glad to read all about this Gaiman title now. I've just read his "Fortunately the Milk" - also illustrated b y Chris Riddell - through a library copy found in grandson's bedroom while I was away.

Thanks very much for contributing this. The Sleeper and The Spindle's been a good title for ABR to pause on a while . . .