When Marnie Was There, by Joan G Robinson: reviewed by Sue Purkiss

Earlier in the year, I went on holiday to Norfolk. I'd only been there once before, to Yarmouth, years ago, and I didn't have very high expectations. I thought it was going to be flat and rather dull.

I was so wrong! In North Norfolk, where we were, the countryside was lovely: sloping fields, sometimes with rows of daffodils, woods, streams - and just something about the light. The towns and villages were compact, with characterful coffee shops, there was Nelson's birthplace, Blickling Hall and Sheringham Park - and then there was the coast. Salt marshes, great stretches of sand, circling birds - and vast skies. 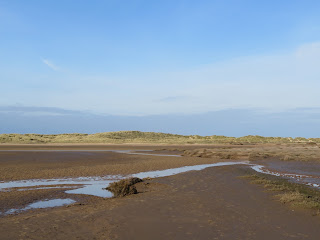 At a shop at Cley Nature Reserve I bought the first in a series of mysteries set on the Norfolk coast, written by Elly Griffiths. (Brilliant - for a review see here.) After I'd written about it, a friend who lives in Norwich, writer Paeony Lewis, asked if I'd read a children's book called When Marnie Was There, by Joan G Robinson - it too was set in Norfolk, and she had a feeling I might like it.

She was absolutely right, and I don't know why I hadn't heard of it before. It was published in 1967 - I was a teenager then, so I suppose I was a bit too old for it and perhaps that's why I missed it. As with the Elly Griffiths books, the shifting, changing seascape is an integral part of the story; you can't always be sure what you're seeing - or even, perhaps, when you're seeing it. People from the Neolithic, Vikings, smugglers - none of these would look out of place here.

So it really doesn't seem too surprising when lonely orphan Anna, staying with an elderly couple for the summer, sees a girl in a white dress with long pale hair in the window of a house across the creek - a girl whom no-one else seems to have noticed. Anna is a self-contained child and a lonely one. She doesn't know how to make friends and she's given up trying. 'She knew perfectly well... that things like parties and best friends and going to tea with people were fine for everybody else, because everyone else was 'inside' - inside some sort of invisible magic circle. But Anna herself was outside. And so these things had nothing to do with her. It was as simple as that.'

But it's different with Marnie. The two girls are drawn to each other, and Anna - in this world of the sixties, where a child can spend hours by herself on the sea shore, in a boat, sometimes with an eccentric old man called Wuntermenny - is happier than she has ever been. As she spends time with Marnie, Anna blossoms; she becomes happier and more confident, more able to reach out to other people. I won't spoil the story - but at the end of it, Anna has learnt a great deal about herself in all sorts of ways - from her encounter with the mysterious Marnie, she's gained so much.


From the postscript, written by Joan Robinson's daughter, it's clear that this has been a novel which has appealed to people all over the world - she tells the story of a Japanese man, who, having read the book as a teenager, set out to find the place where it was set, with only the book itself as a guide. In the book, the village is called Little Overton - but that wasn't much help, because its real name is Burnham Overy. Still, he took the train to Kings Lynn, as Anna did in the book, caught the bus along the coast as she did - and recognised the place by a windmill which features in the book.

First published in 1967, my edition was printed in 2014. A film was made of it recently. This is an enduring story, a classic. And this doesn't surprise me. It may be set in the mid-twentieth century, but the emotional landscape of Anna - initially bleak, cold and lonely - ensures, sadly, that it will always be relevant; there will always be children who feel they don't fit. And the physical landscape of the Norfolk coast - wild, empty, sea-washed - provides a perfect reflection of her inner life, and a  perfect setting for a story where the barriers between reality and imagination shift and rearrange themselves - like the sand dunes and marshes themselves.

I remember reading this book around 1970, when I was in my late twenties. I loved it - probably because I had been that sort of child myself.

How lovely, Sue. I'm not always right, but this time I succeeded in recommending a book that was truly enjoyed - hurrah! I think I read it over 15 years ago and it made a poignant, wistful impression that still echoes. After I'd read the book I was determined to add a greater sense of place to my own writing. I hope your review encourages others to read 'When Marnie Was There' and now I'm going to try and find my copy as it deserves to be reread.

Thanks, Paeony - and thanks for recommending it! And Ann - me too!

No I don't know it, but now must find and read it. Thanks for posting this.

If you'd like an alternative to casually picking up girls and trying to figure out the right thing to do...

If you would prefer to have women pick YOU, instead of spending your nights prowling around in crowded bars and night clubs...

Then I urge you to view this eye-opening video to learn a amazing little secret that might get you your very own harem of hot women: