Regular readers of this blog know that I often review books by friends of mine, contrary to the normal rules which govern things like favouritism, log rolling etc. I've often said: it's not my fault if my friends write recommendable books and I hope readers will trust me in this matter. The book I'd like to draw to your attention on this occasion breaks EVEN MORE RULES! The writer is not only a friend of mine, but her publishing house, Christmas Press, has actually published a book by me. So I'm on a bit of a sticky wicket here... but I have no connection whatever with the artist, Christopher Nielsen, who takes half the credit for this smashing picture book. 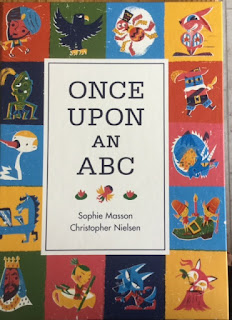 But to be honest, when I was given this book as a gift by Sophie Masson, I was struck by what an original idea it was. There are hundreds of alphabet books, and lots of them are marvellous. My favourite when my own children were growing up was Helen Oxenbury's The ABC of Things. But what I've not seen was a book which introduced both the alphabet (endpaper below) 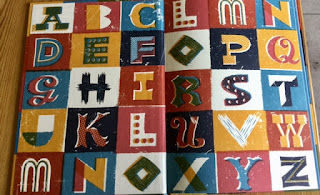 and for every letter, a picture of a character from world folk and fairy tale. Below is a mermaid, whom I particularly like because she seems to be advertising Shell Petrol! 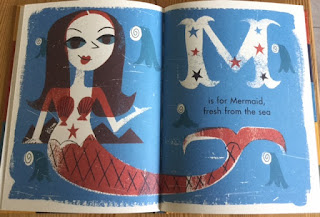 And here's Pegasus and the Queen from Snow White. Masson covers  a huge span of fairy and folk tales from all over the world, from Anansi the spider to "Z is the Zero becoming a hero" at the end, through Yggdrasil and trolls and Red Riding Hood's Grandma, and many more besides. 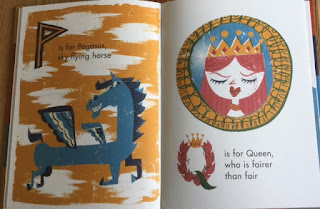 The text rhymes with great cleverness and there isn't a child who won't enjoy  speaking it aloud with its parents and who will soon have it entirely by heart. You've seen some of the pictures. They're  beautiful: strong and modern and printed in unusually subtle shades of every colour.  It's a winner, this book and I do hope many reception teachers as well as parents will try and get hold of it. In these days of the internet, it shouldn't be a problem buying it from Australia.  The publisher's website address is below. And maybe, who knows, there's a British publisher who will step up and make it available here.

What a brilliant, intriguing introduction to a whole host of stories. A truly wonderful idea.

Get professional trading signals sent to your cell phone daily.

Start following our signals today & profit up to 270% daily.