Oh dear! I hesitated when this book came through my large letterbox, because RADIOBOY is a children’s novel by a celebrity, even if  - shhh! sorry! - Christian O’Connell isn’t someone I’d ever heard about.  He is, I’ve now discovered, a popular early-morning presenter on Absolute Radio - which may not reach the North . . . 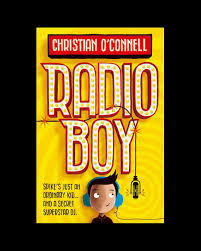 Knowing O'Connell's background, it’s not a great surprise that the hero of this book, eleven-year-old Spike Hughes, has been presenting his own 6am radio show, The Wacky Kids Wonder Hour, as a volunteer at the local hospital radio station. However, when the book opens, Spike’s single, wonderful hour has been allocated to Graham’s Garden Gang.

As Spike explains:
I was being sacked and replaced by a show about allotments and hedges presented by a gnome.
“When’s my last show?” I asked, thinking at least I could have one big send off.
“You’ve just done it.”
And that’s how my career in radio ended.

I really warmed to young Spike as a character: he is a shy, timid boy who struggles to be heard and who feels that radio is his only one way of expressing himself.  He has two best friends, Arty and Holly, and these three make up the membership of St Brenda’s After-School AV Club, run by a sympathetic teacher, Mr Taggart.

At Taggart’s suggestion, the school Headmaster Mr Harris - aka Fishface  –  decides to have a radio station in school. Spike and his friends are overjoyed. Who else could run it but the AV Club? Arty is a music buff, know for his huge collection of old vinyl records, the super-organised Holly will be an excellent studio producer, and Spike already has the needed experience  . . .

Unbelievably, Mr Harris announces that his own son will present St Brenda’s “Merit Radio” show, a programme quickly revealed to be Mr Harris’s way of imposing his views on the school.
“Each lunchtime, pupils who have achieved high grades will have their names readout on the air, as I believe you disc jockeys say.”

Mr Harris uses the radio station to publicise children he considers winners, as well as Grade One trumpeters and stamp collectors.

Spike is disgusted. A school radio station should be for everyone, and especially for those children who aren’t winners and who don’t get the best grades. Spike knows that the underdogs, the also-rans, the losers and the kids with difficulties are the children who need the fun!

Luckily, Spike’s father reveals his is on his side. He encourages Spike to set up a once-a-week radio studio within the overgrown shed at the end of the garden. Spike doesn’t want his over-worrying Mum to find out, so he names the internet radio show THE SECRET SHED SHOW and Art and Holly are there to be part of the team.

As an adult reader, I did enjoy and appreciates Spike’s dad’s secret help as a re-assertion of his own youthful dreams.

At first, the school programme goes brilliantly. Spike, using a voice-distorter as a disguisee, becomes the funny, rebellious Radioboy. Soon word spreads at school about the Secret Shed Show and there’s a growing audience of kids listening and emailing in to the station.

However, as Spike feels the power of his RadioBoy persona, he pushes things too far. His joke “interviews” with Mr Harris and his comments on life within St Brenda’s school start to bother Art and Holly. They ask Spike to hold back but, carried away by his new fame, he ignores them.

The furious Mr Hughes imposes additional homework on everyone so Radioboy - without checking with his team or thinking things through - calls pupils out on a sit-down strike on the school playground. Art and Holly, furious at being ignored, walk away from the studio.

Stunned, Spike realises he’s in the wrong. How can he sort things out? How can he hold on to the show’s fans? And how can Radioboy survive Fishface’s cunning scheme?

The sneaky Mr Harris comes up with a cunning challenge: whoever reveals Radioboy’s identity will have no homework for the rest of the school year. Who will be able to resist that? Someone is bound to reveal the truth, maybe even Art or Holly. Time is definitely running out for Spike and THE SECRET SHED SHOW!

Because this is an amiable story, the reader senses that everything will work out alright for Spike although it is difficult to see how. Things soon escalate into, what Spike says, are the
“barely believable events of the weirdest day of my life.”
I really liked the surprises and complications in the well-developed ending, and how problems aren’t solved easily or quickly.

Although RADIOBOY is written in the first person (echoing the popular Wimpy Kid or Tom Gates type series) I felt that the story is a stronger and more substantial novel than it first appears.  I wasn’t absolutely sure that younger KS2 readers would follow Spike’s long and slightly off-plot riffs on parents, neighbours and school life – especially the hugely overblown Mr Harris and his jumbo sausage rolls – but these moments certainly added to the slightly anarchic mood of comedy within of the book.

Besides, there’s definitely a love of language partying away in O’Connell’s writing, for example: in the way that Arty’s cake-factory-owning father calls his home Chateaux Gateaux, or in Lionel Vinyl, the second-hand record store where Arty gets his LP’s, and so on, and I must mention the quiet humour hidden within Rob Biddulph’s black and white illustrations.

A particular thing I did welcome about the RADIOBOY book was the friendly feeling of an everyday family, living within an urban community in Britain now. It felt like a place where, while the grown-ups might display quirks and odd preoccupations, they were mostly on your side.

So, all in all, RADIOBOY, for me, was a book with a good heart, if that makes sense. Along with the planted stink-bombs and flights of wacky comedy, the book shares wise lessons about the mixed roles of media, the dangers of anonymous messages and makes the point that radio (and therefore other) shows are a team effort, not just a single star performer.

I read RADIOBOY myself first - after that initial grumble mentioned earlier - and then, warmed by the story and character more than I expected, decided to road-test it on a Year 6  friend in the evenings. An able reader, he often feels overdosed by school online comprehension tests and reading reports.

Well, we read chapters of RADIOBOY together and then I left him to read on – and  then one night he read right through to the end while I was still busy downstairs. Bah! It was good to see him reminded that books can still be fun.
Thanks for that, Christian O’Connell! 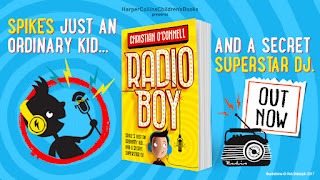 Mr Taggart? Does he speak in a low Glaswegian growl and say things like, "This is muhduh!"
Great review of what sounds like a really good read. Proof that some celebrities can write a good book!