The Wizards of Once, by Cressida Cowell - reviewed by Sue Purkiss

This is the first of a new series by Cressida Cowell, author of the very popular 'How to Train your Dragon' series. That was rooted in the world of the Vikings; this is set in a magical long-ago time in 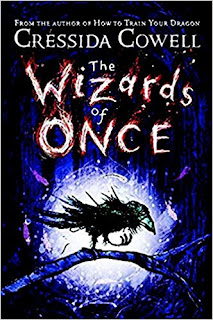 Britain, when woods covered the islands were truly wild.

There are two sets of beings: the Wizards, who are magical but well-intentioned, and the Warriors, who have no magic but do have iron, against which magic has no power. There was also a third set, the Witches. These had magic but were evil, and have been destroyed by the Warriors. Unfortunately, in their zeal to rid the world of the Witches and their evil, they have decided that every other magical creature must also be destroyed.

There are hints of Shakespeare's The Tempest - one of the characters is called Sycorax, for example. But there is also a nod to Romeo and Juliet: Xar, the son of the leader of the Wizards, the Enchanter, meets up with Wish, the daughter of the Queen of the Warriors, Sycorax. In a twist, Xar so far shows no signs of having magic, whereas it seems that Wish perhaps does. The two children at first squabble, but later become friends.

First Xar is captured by the Warriors, then Wish falls into the hands of the Wizards, or possibly it's the other way around. You get the feeling that everyone quite enjoys these tussles. But something much darker is going on. At the beginning of the book, Xar has found a huge black feather. He's convinced that it's a witch's feather, and he thinks that if he can summon up a witch, this will help him to gain access to the magic he desperately wants. But he utterly underestimates the power and the evil which will be unleashed if these creatures are allowed to return...

Xar and Wish are both delightful characters. Xar is impulsive, disobedient, and very likeable. Wish is more serious, and more wistful; she's treated with contempt by her powerful, beautiful mother, but still wishes to please her - just as Xar wants to please his charismatic father, the Enchanter. There's a host of delightful magical creatures and other acolytes of the two children too. The book is a beautiful object: hard-backed, chunky, and lavishly illustrated by Cressida Cowell. (The pictures of animals in particular, such as the wolves above, are really beautiful.) She has created another very engaging world, and I suspect this series will prove as popular as the first.

Return to REVIEWS HOMEPAGE
Posted by Sue Purkiss at 16:16 Permalink