A Note Of Explanation by Vita Sackville–West illustrated by Kate Baylay. Review by Lynda Waterhouse 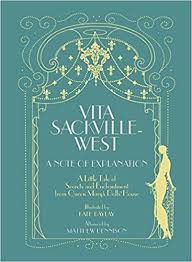 A Note of Explanation is being published by the Royal Collection Trust for the first time since its creation in the 1920’s in a 250 x175mm sized cloth bound edition with stunning illustrations by Kate Bayley.
The original miniature copy of this book is housed in the library of Queen Mary’s Dolls’ House at Windsor Castle. This Little Tale of Secrets and Enchantment was hand written by Vita Sackville-West and housed alongside works by Rudyard Kipling, Sir Arthur Conan Doyle, Joseph Conrad ,Edith Wharton and  numerous other authors in the dolls’ house library. The book plates were designed by Winnie the Pooh illustrator E.H Shepherd.
Queen Mary’s Dolls’ House is more an architectural model than child’s plaything. It was designed by the architect Sir Edwin Lutyens at the request of one of Queen Victoria’s granddaughter’s, Princess Marie Louise. She wanted to create a gift for her childhood friend Queen Mary. The house with all its miniature working models forms a perfect record of an Edwardian country house created in the aftermath of the First World War.
No dolls live inside its lavish interiors. There is a tiny doll in the nursery, a cat and a mouse in the kitchen and a snail and a bird’s nest in the garden. But in Vita Sackville-West’s story the house is inhabited by a lively inquisitive time travelling house sprite.
Prior to moving in she had waved Cinderella off to her ball and been present when the Prince kissed the Sleeping Beauty. One of her most treasured possessions was the pea which had given the Princess such a sleepless night. She has visited Scheherazade (whom she thought long-winded and a bore), Aladdin’s palace and travelled through the centuries always following the fashion of the country and the day.
Once installed in the house she makes full use of all the facilities in the house; riding up and down in the lift, bathing in the malachite bath, testing all the beds  and generally making a mess around the place.
The author Vita Sackville-West was a poet, novelist and garden designer, best known for designing the gardens of Sissinghurst Castle.  She is also known for her relationship with Virginia Woolf, and being the inspiration for her 1928 novel Orlando.  Dedicated to Sackville-West, Orlando tells the story of a fashion conscious, gender-fluid poet who lives for centuries, meeting famous historical figures along the way. Sounds familiar? Sackville-West created this story with its similar concept four years earlier.
Kate Bayley’s beautiful art-deco style illustrations are perfect for this story reflecting the wit and playfulness of the text.
This would be a delightful story to read aloud. Children familiar with Downton Abbey or Agatha Christie dramas on television will relish the language.

This "Note" sounds like a very charming kind of book, Lynda. Thanks!