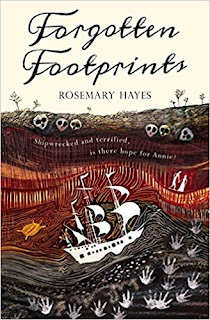 I was first drawn to this book by the beautiful cover. It's a dramatic adventure story based on the real-life loss of a Dutch merchant ship, the Zuytdorp, in a storm in 1712 off the west coast of Australia. From the known facts - that the ship had lost contact with her sister ship, that food supplies were low, and that some of the people aboard were known to have survived, Rosemary Hayes has created a strong, credible and moving narrative with a powerful heroine.

Fifteen-year-old Annie is the daughter of Andries Jansz, an employee of the Dutch East India Company, and his pregnant wife Susan. Andries is going out to a new job, overseeing the company's warehouses in Java. On the long voyage Annie meets Francois, a young midshipman, and their developing youthful romance runs alongside Annie's involvement in helping the ship's doctor with his work and in teaching a downtrodden ship's boy to read and write.

The voyage is beset by problems - bad weather, fever and delays - and many people die, including the doctor. Andries becomes ill with fever, and Susan is forced to give birth to her child - the longed-for son - on board ship.

From this point on, the story becomes unputdownable as the ship is pounded by violent storms and eventually wrecked on the coast of Australia. Half of those on board are drowned; others die later as they struggle to survive and set up a camp.

How the survivors make a place to live, encounter local tribes and hunt for food, makes for a dramatic story. Susan feeds the baby, but she has lost the will to live, and it's Annie who must take care of him, while Francois protects her from the attentions of some of the rougher men. She is able to rely on Francois until the moment when he has to leave with a group of crewmen seeking a better site for a permanent settlement.

This is a well-constructed story in which every element is made to count. It grows and develops and delivers a powerful ending that took me by surprise.  Easy to read, with strong emotions and plenty of action, it's suitable for anyone aged about eleven or over.

Thank you Ann for this lovely review xx