STAR BY STAR by Sheena Wilkinson. Reviewed by Adèle Geras

I hope it's not too late to wish all readers of this blog a very happy 2018. The year is significant. It's the centenary of the first ever election in which women (over thirty years old, and householders, but still) were allowed to vote. Today's young people, for all that  more and more of them are involved in politics, do not, I think, fully appreciate the work of past generations of women in the struggle  to win the right to have a say in the way that they're governed. I feel that  people of all ages and both sexes take the vote for granted and the figures of the turnout always astonish me.  I often think voting should be made compulsory, as in Australia, and I certainly think that you lose many of your moaning-about-the-government rights if you didn't even bother to turn up at the polling station. 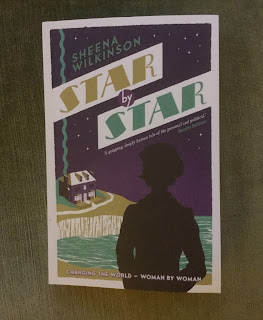 All congratulations, then, to Sheena Wilkinson for being very fast off the mark this year with an informative, interesting and engaging novel for young people. Teachers all over the British Isles, as well as in Ireland, will be grateful to Wilkinson for providing a human and touching account of how things were in December a hundred years ago.

A disclaimer follows. This writer is a friend of mine and we each had a story in the anthology called THE GREAT WAR, which was published in 2014 by Walker Books. That book marked the beginning of the War and this novel (published in paperback by Irish publisher, Little Island) marks its end. Wilkinson has much to say about this period and this novel, even while it's very enjoyable as a story to entertain and move its readers, is also a good introduction to the history of the period in  Ireland. There's a very useful note before the story begins which explains the historical background for young readers clearly and once a reader embarks on the actual story, she already knows all the necessary facts.

And there is much to take in. The Great War, the pandemic of Spanish flu that followed it, the situation of women in Ireland, the various factions seeking the vote in the December election and above all, the fight, over decades, for women to be allowed to have a say in who governs them: all these matters are discussed here in one way or another.

We follow Stella, whose suffragette mother has died of the flu in England, back to Ireland and we meet a whole cast of fascinating characters who over the course of the book, both teach Stella many things and also learn many things themselves. She goes to live with her aunt Nancy, who runs a guesthouse called Cliffside House, one of whose residents doesn't eat with the others. This is Captain Reid, who has served in the Great War and who ends up being important to the narrative. The other residents and the life of the small town are beautifully described. Every character springs to life and Stella herself is an engaging and amusing narrator of her own story and that of the fight for suffrage.

Cars are just beginning to be used for getting about and poor Stella is very car sick throughout the book. This can sometimes be funny but mostly it's a metaphor for 'feeling the fear and doing it anyway.'

There are revelations and surprises throughout the novel and I'm not going to give any of those away, but I urge you to read this excellent and important book, and to give it to any teenager who's studying The Great War. This part of that conflict is not often written about. The attention of most people writing about the period is often on the men fighting the war, so all credit to Wilkinson for highlighting the struggle of women for their rights.