ELISE AND THE SECOND HAND DOG, by Bjarne Reuter, reviewed by Saviour Pirotta 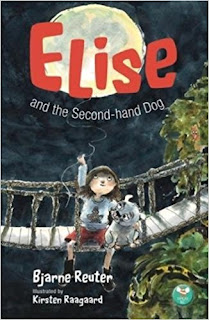 Title: Elise and the Second-Hand Dog
Illustrated by Kirsten Raagaard
Translated from the Danish by Sian Mckie
Published by Wacky Bee Books, 2018

Bjarne Reuter is considered a national treasure in Denmark. His first children's book, Kidnapping, was published in 1975 and since then he has won major awards in both his native country and Germany.

Now Wacky Bee Books brings us his 2016 middle-grade novel, Elise and the Second-Hand Dog.  Elise, who lives in Copenhagen, misses her mum who is helping to build a suspension bridge in the Amazon rainforest.  Her dad, a violinist, gives in to her pleas to buy a dog. As there's not much money, the only pug they can afford is a second-hand asthmatic one with a rotund belly, spindly legs and ears that stick out at different angles. He smells of cheese. A close encounter with a cement mixer has left him looking worse for wear. Elise's dad thinks he's the most horrible-looking dog in the world but Elise decides he's as handsome as a prince and decides to name him Prince Valiant the Great.

During a private, Christening ceremony, involving Russian choral music and white vermouth borrowed from an eccentric neighbour called Miss Martini, the dog reveals that he already has a name. McAduddi. He's from Tobermory in Scotland and, yes, he can talk. His mum taught him. Together, Elise and McAduddi, have a string of wonderful adventures that cements their friendship forever.

This is a delightful book, full of warmth, humour and well-defined characters you will fall in love with. Elise's community comes alive on the page and reveals itself to be a warm, welcoming one. Kirsten Raagaard's illustrations are a joy that enhance the story. It's one to come back to over and over again. I especially love how Reuter and his translator don't shy away from using difficult names of composers and places.  The book is about to be turned into a film and a television series in Denmark. I hope they'll be released here too, and that more of Bjarne Reuter's books make it to our shores in translation. This one is a gem.

Saviour Pirotta is the author of the Ancient Greek Mysteries published by Bloomsbury. Visit him at www.spirotta.com. Follow on twitter

Return to REVIEWS HOMEPAGE
Posted by Saviour Pirotta at 02:00 Permalink