This is a thoughtful novel - funny, but with very serious undercurrents - about Angelica, who is known as Jelly (not only because it's short for Angelica). Jelly is the narrator, and just as in class she plays the comedian to deflect attention from her weight, she acts a part for the reader too, often trying to convince us that she really doesn't care about being teased or not being able to wear the kind of clothes her slimmer friends wear - though her hurt does show through. Jo Cotterill handles this very adeptly, using poems which Jelly writes in secret to express her real feelings.

But the poems also play a crucial part in the plot, which of course I won't reveal. But trust me, it's cleverly done. 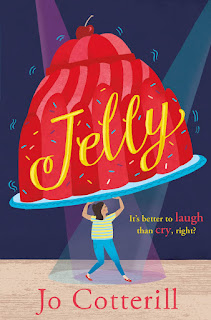 Jelly's mum is single, slim and pretty, but seems to have bad taste in boyfriends - until she meets Lennon, a musician. Lennon is a lovely character. He is genuinely interested in Jelly, and turns out to be good for both her and her mother - which is actually a delightful surprise: writers often take delight in throwing at their hero or heroine every misfortune they can think of, so when Lennon first appears, you take a deep breath and wait for him to turn out to be deeply unpleasant beneath the charming exterior. But it doesn't happen, and I found this really refreshing: Jo Cotterill is good at upending the reader's expectations.

Jelly is a brilliantly realised character. She's clever, she gets on with people, and she knows how to deflect attention so that she won't be bullied. There are times when it could happen, but she swerves to avoid it: for example, when she's playing football - which she's good at - she gets annoyed with another player and makes a mistake. Will, another player, teases her: "You're like the Hulk, Jelly. He lets his anger get the better of him too." The ball comes at her and she falls awkwardly. Will laughs raucously, and even her friend is smiling. She could get angry, but instead, she deflects: she clowns another fall and says, "Did you see that? I was like a hippo falling off a cliff!" The others laugh, so it's worked: but 'something twinges painfully inside me, but I keep going because they're laughing.'

Even the teachers, to start off with, are amused by her antics. But somehow things start to unravel, and she goes too far and it all goes wrong.

There was one thing that I felt a little puzzled by. Jelly wants to be judged for herself - of course she does, and quite rightly so. But clearly, being overweight makes life difficult for her, and I wondered sometimes why her mother seemed not to see this, buying her doughnuts for treats and so on. A point to discuss - but only one of many: this would be a brilliant book to read with early or pre-teens: a very good read, and one with lots of layers.

I can't believe I missed this! Thank you so much, Sue - and of course your final point is an excellent one. I'd say that Jelly's mum is as confused as Jelly about food and appearance, and you only have to look at her own parents to see where the lack of esteem comes from. I think she's probably in denial - see her reference to 'puppy fat' - but I also suspect that Lennon is going to make a difference to that too...