I recently wrote on our sister blog, ABBA, about books I read as a child which had the power to create a wholly convincing world which was immensely attractive to the young reader I used to be. (See here.)Of course all good books do that up to a point, but there aren't that many which leave you with a slight sense of loss when you read the last page and find yourself on the outside once more. 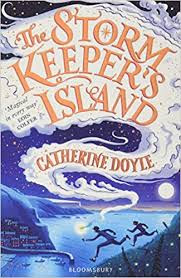 I think that this book, The Storm Keeper's Island, has that quality. The hero, a boy called Fionn Boyle, is not particularly brave. I love this:

He didn't know how to be brave. Whenever he watched 'The Lord of the Rings', he imagined himself as a lone rider galloping away from a battle while all the other characters were marching into it. When everyone else was in Helm's Deep, he'd be back in the Shire, making a sandwich.

His mother is ill, with a deep sadness which is clearly connected with Fionn's father's death by drowning before Fionn was born. Fionn is afraid of the sea, which is unfortunate as he is travelling to an island, Arranmore, with his sister Tara, to stay with their grandfather. Oddly to the reader, Fionn has never been there before: there is clearly some mystery associated with the island, his father's death, and his mother's illness.

Fionn's relationship with his sister is very real. She's thirteen and he's eleven; until she turned thirteen, they were close, but now that's all changed as she's discovered lip gloss and boys, in particular one Bartley Beasley. Catherine Doyle is very good at dialogue - Fionn and Tara's exchanges are spiky and funny. Yet underneath the bickering, they are close, and in the end, Tara will need Fionn to save her. Because it turns out that this island is magical, and is in the care of the Storm Keeper, Fionn's grandfather: but the old man's power is dwindling (in a very human way that many of us will recognize), and Fionn, though he knows nothing of it at first, is to be his successor, with great power at his disposal - and a dark and ancient enemy lying in wait for him.

The book is beautifully written. The characters are very human and very real, as is the world they come from. And perhaps this is what makes the magic seem perfectly feasible: that and the fact that it is contained in the environs of this island off the coast of Ireland - which is a real place, and one the author knows well, and clearly loves. It's not often I can't put a book down, but I read this one late into the night until I'd finished it.

There is to be a sequel, and I've a feeling I've read somewhere that there will be more in the series to follow, which I think is excellent news.

My website is here.
My own blog, A Fool On A Hill, is here.
I also blog on the 16th of each month at The History Girls


Return to REVIEWS HOMEPAGE
Posted by Sue Purkiss at 03:30 Permalink