The Dangerous Lives of the Jacobites, by Linda Strachan and Darren Gate. Reviewed by Saviour Pirotta 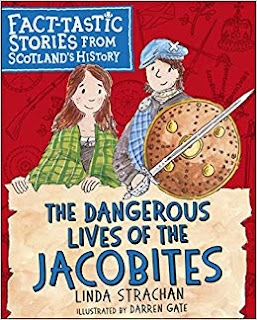 THE DANGEROUS LIVES OF THE JACOBITES
written by Linda Strachan
Illustrated by Darren Gate
Published by Kelpies, 2019

Like many people my age, I was a big fan of Look and Learn, an educational magazine that was published for two whole decades starting in 1962. It had a perfect mix of articles taking in geography, science, history and world culture, cartoon-strip versions of famous literary classics and even science fiction.

For me and, I suspect for many others, the biggest draw was the historical element. Lavishly illustrated by well-known artists of the time, the articles often read like fiction, pulling you back in time to witness the events with your own eyes. I used to wait with bated breath from month to month.

Part of a series called Fact-Tastic Stories from Scotland's History, The Dangerous Lives of the Jacobites has much the same feel. It mixes first-person narratives with nuggets of well-chosen information and fantastic artwork from Darren Gate.

The Jacobites were supporters of the Stuart royal family, intent on returning them to the thrones of England, Scotland and Ireland. They undertook four main uprisings against the English government, between 1688 and 1746. Strachan's story follows a boy called Rob as he joins the uprising of 1745 which culminated in the famous battle of Culloden. With his father and a friend called Jamie, he enlists in Bonnie Prince Charlie's army which marches on London only to turn back when the promised help from France does not arrive. Rob's experiences come alive on the page as the reader is pulled not only into the thick of battle but also discovers the intricacies of life for ordinary people in the 18th century. Rob's sister Aggie remains home in the Highlands but her narrative adds a depth and richness to the book which I found delightful.

A delightful book that readers will enjoy not only for its educational value but also for its page-turning action!

Saviour's new historical fiction is set in the Orkneys during the Neolithic Age. It's called The Stolen Spear and is published by Maverick on the 28 September. Follow Saviour on twitter @spirotta. His website is www.spirotta.com.

Return to REVIEWS HOMEPAGE
Posted by Saviour Pirotta at 00:30 Permalink

I admit, I have a tremendous sex drive. My boyfriend lives forty miles away. Click here and Check me out i am getting naked here ;)