THE STARMAN AND ME by Sharon Cohen. Reviewed by Sharon Tregenza

THE STARMAN AND ME by Sharon Cohen 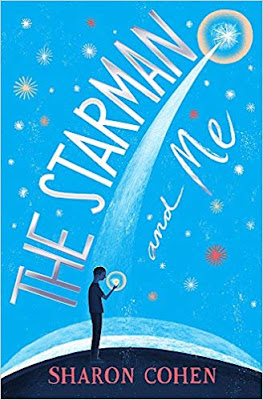 This book is an adventurous mix of science and history with a touch of magic thrown in for good measure. When Kofi first sees Rorty he’s not sure what he is. He obviously has special powers – so is he an alien? And why does he need help?
Kofi discovers that Rorty is being hunted by scientist who abducted him from a remote island. They want him for the chip that is inserted in his brain. It’s this chip that is responsible for his remarkable powers - it was invented as a source for good. Naturally the villains want it for nefarious reasons of their own.

Narrated by Kofi, the story romps along at a good pace and a number of quirky sub plots keep the action flowing, but don’t distract from the main mystery. It’s a charming story that despite some truly emotional moments, never slips into the maudlin. The writing is crisp and intelligent and the characters well-rounded. I love the simplicity of the cover too.

I highly recommend this book for upper MG or lower YA. It’s also a great read for adults.

Return to REVIEWS HOMEPAGE
Posted by Sharon Tregenza at 01:00 Permalink