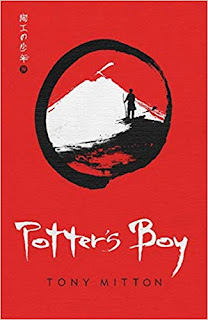 This book is very different; different from the assured funny rhyming texts and thoughtful poems we’re used to from Tony Mitton, and different in character from what is usual in current children’s novels.

Ryo is the Potter’s Boy, son of a village potter but enamoured of the brilliant fighting skills demonstrated by a stranger to that village who sees off a group of bandits. Waiting a year to be sure of what he wants, Ryo then sets out, first to meet a wise old hermit who begins teaching him the mental and physical skills he longs for. Ryo moves on to a training camp where he joins other young people. But tragedy puts an end to the dreams he had set his heart on. It’s a stay with a wise woman hermit that steers him back to his home and decides him to become the best potter he can, imbuing his work with the beauty and wisdom he had learned. But it isn’t the events of this story nearly as much as how it is lived that matters.

This is a quiet, slow-paced book, its story very much ‘told’, often in the almost formal voice of a traditional storyteller. It is a story that gives one much to think about, particularly so for young people steering a course into adulthood. It is set in an unspecified time and place, but a place of mountains and rice and plums and wheat tea, where a powerful emperor makes his power apparent. Very different from the physical place and busy society where our young people are growing up now, but the meditative thoughts and guidance as to how to make choices, how to control oneself, how to be at ease within the world, are highly pertinent.

This is going to be a very special read for particular children. I urge school librarians to read it, and then pair it with the children who want something gentler and deeper than the slam-bang action of so many YA books. For thoughtful people of perhaps nine upwards.


Return to REVIEWS HOMEPAGE
Posted by Pippa Goodhart at 00:30 Permalink

I need more sex, ok? Before I die I wanna taste everyone in the world. Click here and Check me out i am getting naked here ;)

This has to be one of the most intelligent web contents I've come across in recent times. The style and delivery is similar to how we have the NCLEX CERTIFICATE FOR SALE​ ​ that is changing the lives of State Registered Nurses right now.

Whenever there is a better way to BUY NCLEX CERTIFICATE ONLINE​ ​ I'll make sure to keep you and your audience informed. You can join our group of Database certificates experts @ TELEGRAM GROUP​ ​

I'll definitely bookmark this link so I can always come back for more informative content. Cheers y'all and happy new year.