This is Shirley-Anne McMillan’s third novel (plus one self-pubbed) and I’ve loved all three. She doesn’t shy away from difficult topics but they’re handled with sensitivity and a light touch leaving plenty of room for humour. 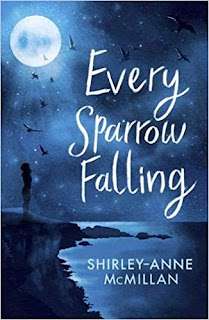 Cariad is a foster kid who’s been tossed around the system and chucked out of more than one foster home for being a bad girl. At 16, she is realising that this is her last chance to make a foster home work and have a family. Unfortunately this new home is the home of a conservative evangelical Christian couple she has zero in common with.

Her attempts to fit in with the local Youth Fellowship and the Scripture Union kids at school are frustrating and hilarious and she’d really rather be drinking on the cliffs with Brains and his boyfriend Muff, or groping Stevie B from school who she’s not even sure she really likes.

The small seaside town becomes a lot more interesting when she meets a boy from school who’s been missing, presumed dead, for weeks…

I read this in one sitting and found the storyline about the Christian/LGBT conflict, which is a large part of the plot, realistic enough to leave me feeling physically angry and frustrated at times, and the ending was heart-breaking.

Cariad is a really believable character in that she isn’t unrealistically good or brave. She’s a normal girl trying to keep her head down and feeling powerless but troubled by what she sees going on around her. But helping her friends means risking the only stability she’s had in her life and facing down a whole community by herself.

And if that’s not enough to tempt you, there’s a very funny incident involving a black mass, a Ouija board, a load of drunk teens and a police raid in a National Trust monument… As you do.

Return to REVIEWS HOMEPAGE
Posted by Kelly McCaughrain at 16:55 Permalink

This novel does sound interesting, Kelly. Conflicting beliefs, just enough darkness and with a sense of humour. Thanks.

Yes! Shirley's books are just getting better and better! She's such an amazing writer. I'm really looking forward to this one, she doesn't flinch away from the tough topics. We need more of this!