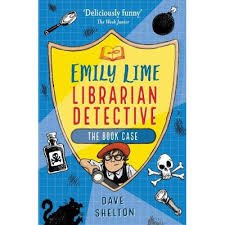 It was the title of the book that made me buy it – who can resist a story about a librarian detective called Emily Lime and a story called The Book Case?  It was Frugal Husband who pointed out that Emily Lime is actually a palindrome.
I was also familiar with the author Dave Sheldon from his hilarious comic strip Good Dog Bad Dog in the Phoenix.
The story begins with Daphne, a girl who is desperate for something new to read, being handed a book on a train station. Daphne, after an unfortunate incident in her previous school, is on her way to St Rita’s School for Spirited Girls where Mrs Crump, the headmistress, had offered her a scholarship in recognition of Daphne’s ‘skills and abilities that would be of great use in our library’.
The period that this novel is set in is never explicitly stated but it feel like post Second World War with its steam train and use of language and is a clear homage to St Trinian’s and Ronald Searle’s St Custards. St Rita’s is falling apart and a place full of anarchy, danger and practical jokes.  Daphne teams up with the only boy in the school, George, and the irascible Emily Lime to solve the mysteries of the bank robbery in town and a break-in at the school and uncover the villains.
The writing is fast paced and full of slapstick, deadpan and laugh out loud humour, a scary smoking nun and a stash of hidden loot. The pages are filled with black and white drawings. The plot is full of cannon ball shaped holes but as Emily Lime says – ‘The answer to any problem is always in a book.’
www.davidficklingbooks.com
ISBN978 1 910989395