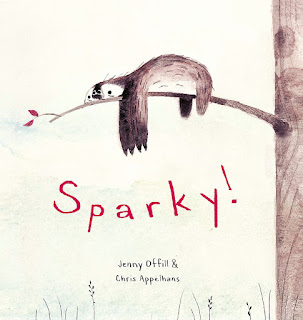 I chuckled many times when reading this offbeat, quirky picture book. Many parents express concerns when their child wants a pet. In Sparky!, the protagonist extracts her mother's promise that she can have any pet as long as it ‘doesn’t need to be walked or bathed or fed.’

And where would a child go when researching the solution to such a problem? Answer: her school librarian Mrs. Kinklebaum ‘(who knows everything in the world).’

Fast forward to the arrival of a sloth by Express Mail.

Sparky is an endearing new family member. Offill makes wry observations about his appearance and the peculiarities of his interactions with his new owner. It takes two days for the sloth to wake up, and when he does:

‘He didn’t know a lot of games, so I taught him some.
We played King of the Mountain
and I won.
We played Hide-and-Seek
and I won…
We played Statue and Sparky
was very, very good.’

The story builds to its climax as the protagonist tries to show off her new pet’s skills to a skeptical neighbor and the local crossing guard in a Trained Sloth Extravaganza. Sparky is not receptive to the girl’s training sessions and, in the end, while the extravaganza does not go as planned, the protagonist accepts his unique characteristics with humor.

The story is told in first person, and although we never learn the girl protagonist’s name, we get a strong sense of her character. She shows resilience in finding a suitable pet, works enthusiastically to engage with her sloth, and ultimately enjoys the sleepy companionships he offers. Offhill’s thumbnail descriptions of the other characters are also deft and telling.

For me this is a story about a girl adapting to befriend an unusual character with charm and humor at its heart. There is a distinct atmosphere to the book. The writing is concise and spare, the jokes dry and understated. Chris Appelhans (an artist for animated feature films including Coraline and Fantastic Mr Fox) captures the slow-moving Sparky with similar humor in his illustrations. Sparky does not move a muscle whether up a tree or sitting on the ground. Even his expression remains largely the same.Tellingly, the last illustration shows the girl and her sloth sitting happily side-by-side on a branch, watching the sun set.

Return to REVIEWS HOMEPAGE
Posted by Sarah Hammond at 00:25 Permalink

One of my favorite things about Sparky is the exclamation mark in the title. From that single piece of misdirection, we constantly adjust our expectations, just like the protagonist. All the hearts for this book!

I don’t know the question, but sex is definitely the answer. Hey, i am looking for an online sex partner ;) Click on my boobs if you are interested (. )( .)