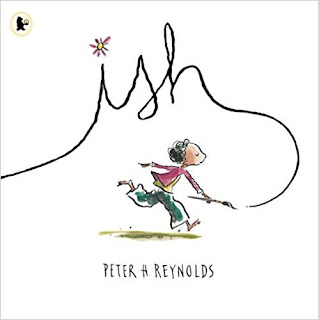 Whether you are a child or an adult, who has not been frustrated at some point in time that whatever-you-have-created is not ‘good’ enough? I certainly have. As a creative writing teacher, I have witnessed children making this comment many times about their stories or illustrations, too.

Here is a suggested solution: read Ish by Peter Reynolds.

Ish follows the story of Ramon who loves to draw. He draws passionately anytime, anything, anywhere until one day his brother Leon makes fun of his artwork.

And with that, Ramon’s confidence in his artistic abilities is dented. His inner critic becomes rampant. Nothing he draws is good enough. Nothing looks right. Drawing after drawing is crumpled and thrown to the ground.

This, I suspect, is an uncomfortably familiar scenario for many creatives the world over.

However, all is not lost. His sister, Marisol, who has been watching from a distance, picks up Ramon’s crumpled drawing and runs away with it. Furious, Ramon chases after her into her room, but then falls silent. This is not the first crumpled drawing that Marisol has retrieved: a whole gallery of his discarded drawings have been saved and pinned to her wall. When she points out her favorite, a vase of flowers, Ramon mutters that it doesn’t look right. Marisol answers: “Well, it looks vase-ISH!”

And with those words, she releases her brother from his exacting, paralyzing standards, and he begins to see his artwork ‘in a whole new way.’

He began to draw what he felt — loose lines.

His confidence grows, and he becomes prolific once more in creating ish-drawings, unfettered by the need to get everything ‘just so.’ And he is not even restricted to his artwork but expresses himself ‘ish-ly’ in writing and other forms too.

This is such a wonderful message to anyone who needs to give themself permission to loosen up, to silence their over-active inner critic, and unburden themselves from the impossible strain of perfectionism. Instead, why not celebrate trying to the capture the essense, or ish-ness, of the world and your experiences? Although the advice in Ish is simple, it is gentle and forgiving and effective and profound.

Ish is part of a trilogy of picture books by Reynolds called Creatrilogy, including The Dot, which encourages us to make a mark and see where it takes us, and Sky Color, which invites the reader to really look at the world around them for inspiration.


Return to REVIEWS HOMEPAGE
Posted by Sarah Hammond at 23:52 Permalink

Thank you for that post Sarah Hammond. A good reminder that there's no need to be perfect.

I think I need this book and its message!

Be gentle with me. Be sweet ad kind, oh hell! Who am I kidding? Flip me over, ride my ass and pull my hair!. Hey, i am looking for an online sexual partner ;) Click on my boobs if you are interested (. )( .)