Welcome to 2020 - and THE BRITANNIA MYSTERIES by LYNNE BENTON: Review by Penny Dolan

Yesterday I saw that an area of land beside Hadrian's Wall, containing a Roman site, had been donated by private landowners to English Heritage.

Consequently, today feels like the right moment to update a past Awfully Big Reviews post, and show how a couple of historic titles had now grown into a complete Britannia Mysteries Trilogy.


A book arrrived through my letterbox a while ago. It was a copy of DANGER AT HADRIAN’S WALL by Lynne Benton, the second in her Britannia series; set in Roman Britain, these are exactly the kind of stories that many KS2 readers would enjoy. 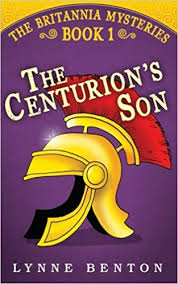 The first, THE CENTURION’S SON, (set in 312 AD) takes place in Isca, in what’s now known as South Wales.

Felix - the hero and twelve year-old son of the title – is anxious: Gaius the Senior Centurion, his trusted father, has been missing for days.

But Gaius has disappeared without telling Felix where he is going, or making any of his usual preparations for a journey, nor leaving any money for Felix to buy food while he was gone.

Felix had hoped that Commander Octavius had sent his father on a secret mission, but then soldiers arrive, claiming his father is a runaway traitor and Felix is thrown in prison himself.  Who will believe or help him? Even if he escapes, what can he do next? Fortunately, his long-time friend Catrin, a Silesian slave-girl with second sight, is ready to help. Despite ill-treatment, cruel treachery and life-threatening dangers, the two determined friends use their wits and their keen, watchful eyes to untangle the mystery.

In DANGER AT HADRIAN’S WALL, Lynne Benton’s second book,  Felix and Catrin have been now adopted by Commander Quintus Maximus and his wife Drusilla. When reports arrive of trouble with the Barbarians, the 2nd Augustan Legion is ordered north to Hadrian’s Wall, Felix is left behind. Desperate to prove his own bravery, Felix hatches a plan that soon has Catrin, himself and others following the footsteps of the legion. The journey is long and hard. Unfortunately, when the band of travellers finally reach the camp at Hadrian’s Wall, the Commander is not pleased. Felix and Catrin find there are worrying signs of treachery and suspicion around the camp too, and trouble with the local Caledonian tribes.

In addition, not only does Catrin become annoyingly jealous of Mina, the new slave girl that Felix has befriended, but she has started dreaming of flames and danger.

Then, to Felix’s horror, Catrin disappears. How can he find what has happened? He will find her, he will and, luckily, the friendly soldier Tullio is there to help and guide him on his quest beyond the Wall . . .

The third book of the trilogy, THE LOST TREASURE OF AQUA SULIS is set in Bath. This novel continues the story of Felix and Catrin as they travel with Drusilla their foster mother to the great city.

Drusilla is there to visit the magical healing waters and make offerings to the Goddess for the safety and health of her young child and her family. Soon enough, Felix and Catrin find themselves caught up in a mystery filled with stolen treasures, false accusations, crimes and secrets.

At the same time, they are both concerned for themselves. Now that Quintus Maximus and Drusilla have a child of their own, what will happen to tCatrin and Felix, especially as they have such an awkward way of finding trouble wherever they go?

Lynne Benton’s writing reflects her knowledge of children, These books in this trilogy, at around a hundred and fifty pages, are not overlong and are easy and pleasing to read.. The short, neatly-plotted chapters make the books very suitable for 7 to 9 year old readers and the author adds just as much incidental historical information as the plots require.

These books are a good choice for children who have Roman Britain as a topic on their school curriculum.

Even though the plots and characters are fictional, the three historical settings - Carleon Roman Fortress in Wales, Hadrian's Wall in Northumberland, and the reconstructed Bath House at Bath - are all there in the real world and available for interesting historical visits, with added inspiration from the BRITANNIA MYSTERIES inspiration.

All three books, published by Coppertree Press, are available through Amazon.

Return to REVIEWS HOMEPAGE
Posted by Penny Dolan at 11:49 Permalink