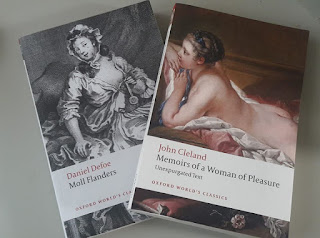 This is a bit unorthodox, but I'm going to look at two similar takes on the same idea: fictional lives of 'women of pleasure' by Daniel Defoe and John Cleland. Both books are of the 'prostitute memoir' genre which enjoyed some popularity in the 17th and 18th centuries. Some were ostensibly the first-person narratives written by actual prostitutes, though both these were written by male novelists who acknowledged their authorship. The original title of Fanny Hill (1748) is Memoirs of a Woman of Pleasure, a title which could have been used by any of these books. The full title of Moll Flanders (1722) is The Fortunes and Misfortunes of the Famous Moll Flanders. Both are in the picaresque style, presenting a sequence of adventures/mishaps that are tied together into a meandering fictional biography. Both follow a familiar pattern of a beautiful young woman forced by a combination of circumstance and libido into a string of sexual adventures related, particularly in the case of Fanny Hill, in considerable graphic detail. The pattern follows a fall from virginal grace through rape (FH) or naively entering a relationship (MF) and the fortunes and misfortunes that follow.

These are not tales of depravity, despite having been framed as such by previous generations of censors and moral arbiters. Both women genuinely love at least some of their partners. Both avoid falling into the kind of penury that would lead them to the fate of the 'two-penny uprights' that haunted parts of London. They have lives with 'keepers' — clients who pay to maintain them in an apartment of their own in exchange for sexual exclusivity. They suffer misfortunes such as inadvertently marrying a brother, being widowed, left with a small child to support and other such fates that could befall anyone. They are brought to grief and joy by a combination of events and their own characters. They are sympathetic characters; Moll Flanders is ashamed by some of the things she has done, and afraid of consequent damnation as well as of social disgrace. This gives a scurrilous tale a veneer of morality, one which is made quite explicit with reference to how it's necessary to tell the details of the debauchery in order to make the moral point about Moll's rehabilitation. Of course, the point of the novel was not the moral lesson, but the titillating narrative of debauchery.

Both books are by men, for men. The women are attractive, enjoy sex, and never stoop so low as to lose the sympathy of their intended readers. Some of the readers no doubt used prostitutes themselves, or would have liked to do so. To read that the prostitutes enjoy the sex would perhaps have salved their consciences and/or added to their pleasure. It is, of course, a thoroughly sanitised version of the life of a 'woman of pleasure'. There are no botched abortions or deaths from sexually transmitted diseases here. The women are not frequently beaten, robbed and otherwise abused by their clients. There is some glee in the fleecing of the male clientele, particularly in the sale for a high price of the same maidenhead on repeated occasions. But of course the reader would never be such a fool as to be taken in like that... While these are both well constructed novels with literary merit, the prostitute-memoir genre also embraced much briefer and more trite narratives which followed a formulaic but probably realistic pattern of descent from pride and beauty to degradation, poverty and despair. These generally delivered a self-righteous moral message at the same time as titillating the reader.

Fanny Hill was published in expurgated form through much of the 20th century. I've not looked to see which bits were removed, but I can guess. The scenes of lesbian sex and the S&M episodes were probably a bit much for puritanical tastes, and perhaps even the more graphic bits of regular heterosex. These were the scenes that no doubt best sold it to its first readers. But it's notable that both Moll and Fanny remain lovable, are in the end financially secure and do not suffer the fate of so many of their real-life counterparts, of violent death, prison or penury. There is nothing here to make the client of prostitutes feel too bad about his habits. Fanny Hill, in particular, does not suffer adverse consequences or even shame. Memoirs of a Woman of Pleasure is often considered the first pornographic novel in English. Cleland wrote it in while in debtors' prison, and boasted that it contained no lewd words — which is true, but there are plenty of lewd acts.

Both books reveal depressing aspects of 18th-century life. The frightening predicament of Moll, Fanny and their colleagues is all too clear. A woman whose 'virtue' has been compromised is ruined and all the rest of her life will be a challenge. She will need her wits about her to survive. An unmarried woman has very few options for earning a living; a life in domestic service is hard and precarious (she can be dismissed at a moment's notice, losing accommodation as well as income at a stroke). If not a wife, it's best to be a mistress — a kept woman with a regular lover who maintains her. Lower than that is a straightforward prostitute, who might start off commanding a high price and being able to pick and choose her clients, but as her beauty (and ability to fake virginity) diminish, her price and opportunities necessarily fail. None, except the wife, is many steps from disaster. Even a wife, if not left a healthy sum, will soon come to grief if her husband predeceases her. It is impossible not to be moved by the terror and desperation that Moll and Fanny are prey to at times, simply by dint of being women in a world made by and for men.

Return to REVIEWS HOMEPAGE
Posted by Stroppy Author at 06:00 Permalink

Awfully Big Reviews hasn't looked at many adult novels for a while, Anne, and these two titles fit boldly that category. Excellent, thoughtful analysis of both books and the issues within them.

I'm catching up on the Trial of Christine Keeler, and being reminded that such and similar attitudes - way back then, in the supposedly swinging 60's, and now - are a constant.

WE SHOULD FUCK. Like right now, right here. Hard, fast. Pin me down, kiss me hard, look me in the eyes and fuck me like you’ve never fucked someone before. Click here and Check me out i am getting naked here ;)