The Snow Spider, by Jenny Nimmo: reviewed by Sue Purkiss

I was interested to read the other day that CBBC has made a series out of The Snow Spider, by Jenny Nimmo. I felt pleased; when my own children were young, there was often a serial on Sunday evenings - John Masefield's The Box of Delights, one with Sian Philips about some children who want to stop developers building on land where there's a badgers' sett - I don't remember what it was called. They were a real pleasure: we would all sit down together to watch and be enthralled. It's many years since I read The Snow Spider, but I felt pretty sure that it would have that same quality - a sense that magic is possible, that enchanted worlds exist, and do so very close to this one.

I knew I still had the book somewhere - it's not the kind that you chuck out in an effort to make more space on the shelves. Sure enough, I found it. It was reprinted in 1991, and cost £2.50. It's not very thick; it strikes me that prices of books haven't gone up in line with inflation. I settled down to read it. 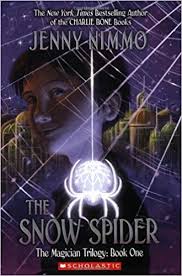 And I was enchanted all over again. It's about a boy called Gwyn who lives on a Welsh hill farm. His home is not a happy one. There's a crushing scene near the beginning whaere his mother has made him a wonderful birthday tea. He and his friends have a marvellous time, and you can tell that such times are rare in this house. But then his father comes home. He switches on the electric light, so that everything looks stark and ugly, and ugly, cold words come out of his mouth. The party comes to an abrupt end.

But he has reason to be unhappy, because his daughter, Bethan, disappeared on the mountain some years before when Gwyn was five. Unfairly, he blames Gwyn for her loss, and is cold and unkind to him. But Gwyn does have, as well as his mother, a grandmother - Nain - who is a colourful, eccentric character. On this birthday Nain gives him some strange gifts, and announces to him that she thinks he is a wizard, descended from wizards in the Mabinogion, the collection of ancient Welsh legends - and now, she tells him, is the time to find out if he does have the power.

And so the story begins. Of course, Gwyn does have the power. The story blends together this element of legendary magic with the story of a family which has suffered an unbearable loss. The characters are very real, with all the faults and propensity for making mistakes of real people. And such is Jenny Nimmo's skill that you never find yourself thinking, "Oh, come now!" Well, I didn't. Everything seemed to happen as a consequence of what had gone before: it all seemed perfectly natural - as if this was a true story that was just waiting to be told. I think that's significant; I've read fantasies recently where the writing is beautiful, but somehow you can see the joins: you read and enjoy, but often you're thinking Oh yes, that was clever, or Yes, I see why s/he had to put that in. I probably notice such things partly because I'm a writer - but in these books, nothing of that kind interrupted my involvement in the books (apart from a few instances where the author put in a comment that predicted the future - this kind of thing: If only he had realised what the result of his actions would be, he never would have...)

I'm off now to hunt down the first episode, which I think may already have been shown. I'm writing this early in April, so by the time you read it, the series may already be over, but hopefully it will still be available on iplayer. In any case, the book will still be there - do seek it out. It would be a lovely one to read aloud.

PS Since writing this, have found that there are two more books which follow on from The Snow Spider - you can get the whole trilogy in one volume on Kindle. If anything, they're even better than the first one.

Thanks for this, Sue, including the news that the Snow Spider trilogy can be found on Kindle.

Although I much prefer reading real books, I re-charged my ancient (unlit) kindle a week ago so now I'm horribly open to temptation.

Your face would look better between my legs. Click here and Check me out i am getting naked here ;)