Testament of Youth, by Vera Brittain — reviewed by Anne Rooney 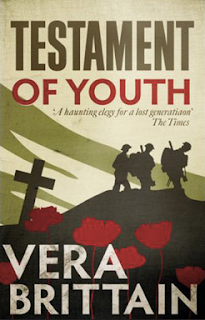 Testament of Youth is not a children's book by any means, but it could well suit young adult readers. Vera Brittain's memoir of her own teenage years in a time of even more turmoil than our world faces right now is inspiring, though sombre. Brittain wrote the book in the 1930s after mulling over the material and wondering for a long time how to present it, but it deals with her coming of age in the First World War. She made a few false starts, once trying to fictionalise it, before settling on a narrative that quotes letters and diaries in places and elsewhere recreates what she lived through as though she remembered every word spoken. It works, and is a most touching and, at times, harrowing account of the worst of times.

In some ways, the world of 1914 — only just over 100 years ago — is jarringly distant. The family wait for letters, spend agonizing days unaware of whether their loved ones have survived a 'push' on the western front, and hear conflicting news reports that are only slowly resolved into anything definite. In a world where we know what is happening the other side of the world seconds after it's happened, it's strange to step back into a time so dislocated from distant events.

Yet there is much in Vera's story that will be familiar. She goes to university — a rare achievement for a young woman — but leaves because of the war. Those freshers who have just fled their universities ahead of the latest lockdown might share some of her feelings of wretched disappointment and being cheated of what they had earned. The turmoil into which ordinary life is cast feels familiar, though our turmoil is not of the same order of magnitude. I think what will speak to young people in Brittain's account is the feeling of loss. Not just the loss of individuals, cruelly and wastefully slaughtered, but the loss of youth, of a generation's spirit, of their energy, optimism, innocence, confidence and enthusiasm for life. She reflects, looking back, that what they lost was irrecoverable. The time before the war is a shimmering phantasm of a life gone forever. There is some of that feeling now, as we realise the things we took for granted. They were the most basic, unexamined pleasures — going to a café, meeting friends in their houses, watching a movie, wandering in and out of shops without queuing, picking up something someone dropped and passing it back to them...

We don't know how long the pandemic will go on. Two years? Three? More? Like the First World War, many people expected it to be short at the start. No one is being honest even now about the real prospects, just as they weren't in the war. In Britain, it comes with the additional catastrophic disruption of Brexit — another event that has stolen so much that our young people grew up expecting to have available to them. The Testament is not a cheery book in any sense, but I feel it speaks to the spirit of our age, particularly to our young people. The young people in the book show such fortitude and compassion, as many of our young people are doing now. It is not cheery, but it in some ways it is heartwarming and hints at hope. We could all do with some hope right now.

Return to REVIEWS HOMEPAGE
Posted by Stroppy Author at 07:00 Permalink