This is technically an adult book, but I thought any older teens interested in climate change would find it really helpful and interesting.The author, Paul Behrens, as well as being an environmental expert, is also an award-winning science communicator, and I think that really comes across in the book. It's very readable, even for non-sciency people (I know nothing about science and even I understood it), and he manages to make it not only understandable but fascinating. 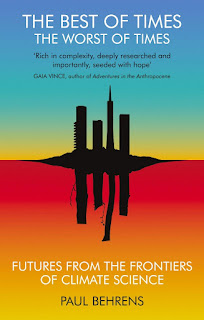 The structure of the book is also really clever. Behrens says he wrote it because when you tell people at dinner parties that you're an environmental scientist, the first thing they ask you is 'How long have we got?' or 'What's going to happen?' This book is his answer to that question and it's laid out in alternating chapters of 'Hope' and 'Pessimism'.

It's broken down into sections like 'Food', 'Energy', 'Population' etc, and then each section has a 'Pessimism' chapter that explains what will happen if we do nothing to remedy these problems, and a 'Hope' section explaining what is possible if we act now.

With the result that it's really a roller-coaster of a book! I finished each Pessimism chapter feeling truly worried, but with each Hope chapter I was amazed by all the possibilities we actually have already at our disposal.

I think it's a really comprehensive introduction to the subject for anyone. It doesn't dumb down the science, it doesn't sugar-coat things, but it also offers possibilities that we can work towards, and, most importantly of all, inspires the reader to go and do something about it, which is what all those Hope chapters are kind of dependent on.

So I'd recommend it for any adults who want to read about climate change but are sick of doom-laden newspaper articles, fake news Twitter feeds, or just the sheer absence of the subject from political discussion. And if you have a teen who's thinking about all this, I'd recommend it for them too. The only chapter I found a little hard to get my head around was the one on the economy (but who understands the economy anyway?), the rest were a really fascinating and enjoyable read and I finished the whole book in a few days. It's not a list of dry facts and science, it's full of stories, but still, every other page contained a fact that just blew my mind, to the extent that I started writing them down so I could launch them at my husband over dinner.

For example, did you know:

And did you know that a third of the UK public are already suffering from eco-anxiety? I imagine a lot of them are young people. I don't think burying our heads in the sand is a helpful response to this anxiety, I think that just makes it worse. This book is ultimately a hopeful one because it gives the reader the information they need to understand the situation and how it can be changed. And it makes it clear that, although we have a role to play by reducing our carbon footprint, the problem won't be solved by blaming us or making us feel guilty about not filling our blue bins. It's about the government, the big polluting companies, the culture of consumption, the mega-wealthy tax-dodgers. I thought it was a great read and I really recommend you put it on your Christmas list!

She also blogs at The Blank Page


Return to REVIEWS HOMEPAGE
Posted by Kelly McCaughrain at 10:56 Permalink

Not an easy read, but this sounds like a book that's definitely needed now. Thanks for this review, Kelly.

**GREAT NEWS**
My purpose out here today is to share this article to the world about how Doctor Balbosa helped me in getting back my ex-boyfriend that broke up with me 4 months ago. I tried all I could to make him see reasons with me so that we can continue our relationship but he denied me. Thank God for giving me the thought of going into the internet to search for help. I searched properly and I saw different reviews on Doctor Balbosa and I insisted on giving it a try by contacting him via call / whats-app on (+1 707 412-0096) and WEBSITE https://balbosasolutionhome.com
He gave me reason to live again and after He prepared the spell, He told me that my ex-boyfriend will come back to me within 28 hours. Can you believe it that my ex-boyfriend really came back and our wedding will be held soon. Contact him now if you need any help and he does a lot of spells. Once again I want to say I'm very grateful for your help this is also his Email Address: balbosasolutionhome@gmail.com
God Bless You...

DR ISIKOLO IS A LIFE SAVER AND I CAN ASSURE YOU ABOUT THAT.
My name is Denisa Popescu and I am here to join the numerous people out here to thank Dr Isikolo for his help and kind gestures towards me. I had a horrible experience going through heartbreak with my man. He left me and I was devastated and couldn't find any sought of help to get him back. At some point I was depressed until I ran into pages where people testified about how Dr Isikolo helped them. I contacted him and he never hesitated to help me as well. Not only did I get my man back after 48 hours, the love and happiness has also been restored better than ever. Dr Isikolo is an amazing personality and I can't thank him enough for his selfless services towards humanity. contact him now via email: isikolosolutionhome@gmail.com or text him via WhatsApp: +2348133261196.