Rumer Godden is a writer who, it seems to me, deserves to be rediscovered. Imagine my delight, therefore, when I learned that Virago were reissuing some of her children's books in the Virago Modern Classics series. THURSDAY'S CHILDREN and LISTEN TO THE NIGHTINGALE are due out in April this year and DARK HORSE and AN EPISODE OF SPARROWS in 2014. Godden's books which I reimember best are IN THIS HOUSE OF BREDE, THE GREENGAGE SUMMER (which is a perfect YA book) and for children, MISS HAPPINESS AND MISS FLOWER and the wonderful THE DOLLS' HOUSE, which has in it Marchpane, one of the most fascinating of all fictional dolls. A quick check on the internet reveals that Pan will be publishing THE GREENGAGE SUMMER this month, but the children's books mentioned above are only available as Kindle editions or expensive second hand copies. So hats off to Virago for striving to bring this writer back into the limelight she ought never really to have left. 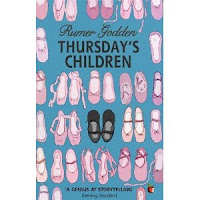 When I was young, this kind of book was what I really wanted to read: a family story, with lots of siblings living under one roof. I wanted a tale about ambition, preferably theatrical or balletic and I wanted lashings of detail and emotion. I wanted to be able to believe in the characters, and if I could identify with the main protagonist, so much the better. I wanted conflict. I wanted drama. In fact, I was looking for what I think a lot of children look for in books: something that's both aspirational and also exciting and moving. A book that was a mixture of the familiar and the exotic was always going to be a winner. In every one of these respects, Rumer Godden has fulfilled my dearest wishes and I enjoyed reading this book enormously. It took me right back to being ten or so, without at any point upsetting my adult self.

A word of warning: this is an old-fashioned book. It was first published in 1984 but even with the mention of television and supermarkets and what Godden calls 'ballpens', you get the feeling reading it that you are going back into the past. Which is fair enough. The 80s is the past and the speed of change in the last decade has been greater somehow than in the thirty years from 1970 to the end of the century. So young readers will be deprived of mobiles, texting, Ipods and all the accoutrements of a 'connected' childhood. They will not find the ubiquitous first person present tense but rather a straightforward, third person narrative which still manages to convey well the point of view of Doone, the young boy at the heart of the story.

The Pennys run a grocery shop. Ma Penny used to have ambitions of appearing on the stage herself but then she married Pa and proceeded to have lots of children, mostly boys.Crystal, the only girl, was a nice surprise and when Doone arrived the family were truly expecting another girl. They had the name 'Lorna' all lined up from one of their favourite novels, so when a boy appeared, 'Doone' was the only option. Beppo, an ex-circus performer who works in the shop, takes Doone under his wing as childcare is a bit hard to come by with so many children, but he's sent packing when Ma discovers that he's been teaching Doone circus tricks, such as tightrope walking. Doone is very upset at Beppo's dismissal. Ma Penny has ambitions for her only daughter and sends her to ballet lessons. Doone has to go with her...there's no one else to look after him. So from an early age he's exposed to music, and dancing and he falls in love with that whole world.

The novel tells the story of Doone's transformation into a ballet dancer and musician. It takes in conflicts with his sister, who is jealous of him and sometimes very unpleasant to him; a gravitation towards adults who understand him better than his parents, his progress through a school clearly based on White Lodge in Richmond, (the school for young ballet dancers who want to join the Royal Ballet,) and his eventual triumph over all the odds that life has thrown in his way. It's a constant roller coaster of events, people, highs and lows, successes and disappointments and there's a great deal of detail about dance, music, and the customs of this wonderful school. I've done events there as a writer and I recognized it at once. I do recommend this novel to anyone who's interested in dancing, of course, but also for every child who's wanted to be appreciated for him/herself and not pushed into some pre-ordained role in the family. It celebrates independence, hard work, discipline and cooperation. It encourages those who regard themselves as not quite the same as everyone else. It's hugely enjoyable and I hope that lots of aspiring ballet dancers will buy it. I suppose with all those ballet shoes on the cover, it's not going to be immediately picked up by boys, but if you have a possible 'proper little Nooryev'* in the family, they would love it too.

My review of LISTEN TO THE NIGHTINGALE will appear on this site on March 14th, 2013.

*For anyone who doesn't know it, A PROPER LITTLE NOOREYEV' by Jean Ure is a wonderful book about a boy who wants to be a dancer. Also highly recommended if you can find it. Publisher: VIRAGO MODERN CLASSICS Price: £6.99 Format: Paperback. ISBN: 978 1844088485

What fantastic news! I love Greengage Summer and Episode of Sparrows.

I only came across Rumer Godden a few years ago, and really enjoyed In This House Of Brede. I didn't know she'd written children's books - thanks, Adele!

Marchpane in the Dolls House was a truly nasty creature. Thank you for reminding me of these books.

eToro is the most recommended forex trading platform for novice and full-time traders.