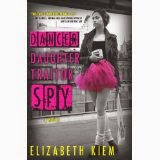 If you love books about the ballet (suffer from enduring nostalgia for Noel Streatfield for instance?) as well relishing thrillers and the murky history of modern Russia, then you may already have come across these two YA novels by Elizabeth Kiem. I've read them in the wrong order: first Hider, Seeker, Secret Keeper (published 2014) which I reviewed for the Bookbag and now the first volume, Dancer, Daughter, Traitor, Spy (2013). Dancer, Daughter focuses on seventeen year old Marina Dukovskaya whose mother, Svetlana, has been principal ballerina at the iconic Bolshoi Ballet for a decade and is now a National Treasure, a Soviet Cultural icon – a key Soviet asset in the celebrity Cold War.

Or is she? The story begins in Moscow, November 1982 on the day of Leonid Brezhnev's death. Aspirant ballerina Marina is, as usual, measuring out her day with a precise number of tendus, frappes and fouettes, in the advanced repertory academy where she and the other stars of the future are distorting their feet and bloodying their toes to learn their trade. Her mind is mainly full of the forthcoming results of a pop music competition and she ignores veiled hints about possible defections and the jealousy of her class mates for her gorgeous new coat, a gift, naturally, for her mother. Marina works hard for her art but takes her life of privilege for granted. On this night, however, the TV First Channel replaces its regular programmes with a film of the Bolshoi's Swan Lake. There are no explanations, no national news or results from the music competition – and Svetlana Dukovskaya doesn't come home.


Two days later Marina and her father learn that Svetlana has been institutionalised. She has apparently suffered a breakdown and has been taken into custody by the State Psychiatric Directorate. Marina's father, a scientist, makes puzzling comments about bacterial warfare and uses the word 'escape'. The word hits Marina like an electric shock or 'the jolt up your spine when you land a jump poorly […] My parents wanted to abandon the Motherland. And they were calling it “escape”?' The following day they get a call from the director of the Bolshoi – Marina has been dismissed. Her father is taken in for questioning, though he is then released. On the day of Brezhnev's funeral, they flee to America. 'I understand the system […] The rules are: if you pose a problem for the Party, if you are a risk to the People, you must be dispensed with. So we are following the rules. We are dispensing of ourselves before the KGB can do it for us.'

Elizabeth Kiem is a former dancer and a Russophile. She's a journalist who has lived in Russia and who acknowledges real life sources for much of her material. I wondered, briefly, what today's teens would make of this harking back to the post-Stalinist era before I realised that the writing in this first section of the novel – actions taken within a world bound by draconian, incomprehensible Rules – works particularly well as it is writing from within a dystopia. The subsequent, main section, following Marina and her father's attempts to make sense of their situation within the Russian emigrant population of Brooklyn, is atmospheric but more confusing as the hostile forces could equally be KGB, CIA, the bratva (Russian Mafia) – or none of them. 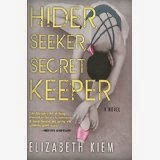 Dancer, Daughter has a twisting plot, where Marina's actions and reactions are as often fuelled by her teenage anger and disorientation as by tangible external threat. I wasn't sure she was quite as convincing a heroine as Lana, her daughter, in volume two and I wasn't sure that the integration of the actual dancing worked as successfully as the interpretations of Stravinky's Danse Sacrale in Hider, Seeker, Secret Keeper. I'd certainly recommend both novels – but I'd probably suggest that you read them the right way round.