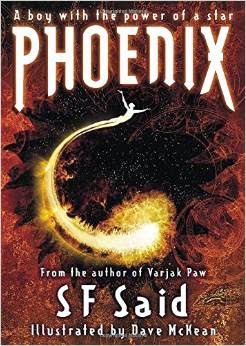 First the blurb….
A BOY WITH THE POWER OF A STAR . . .
Lucky thinks he's an ordinary Human boy. But one night, he dreams that the stars are singing to him, and wakes to find an uncontrollable power rising inside him.
Now he's on the run, racing through space, searching for answers. In a galaxy at war, where Humans and Aliens are deadly enemies, the only people who can help him are an Alien starship crew – and an Alien warrior girl, with neon needles in her hair . . .

I became a reader in the 1970s and this was a golden age for Science Fiction. I had a steady diet of books by the masters of the art, and grew up in a world of aliens, distant planets and giant robots – it was a pretty good time to be a reader. Fashions come and go and, as a children’s librarian, I know that we drifted into a time when you couldn't bribe a young person to read sci-fi. Its image became tainted by a slew of poorly written dross, and cheaply made Star Wars knock-offs, and it simply fell from favour.
Superb books by writers like John Christopher became lost in the melee of ghastly fan-type fiction and, by the time the new century crept in and the Future arrived, we had almost lost the genre for younger readers. It boldly went on for adults and now we have some incredibly fine writers exploring new worlds for us – but in the world of children’s books it had all gone a bit quiet.

I genuinely don’t think that this was for want of good writers, far from it. I think that what actually happened was publishers decided that the genre was not desirable and opted not to commission it. A great shame in my opinion, and a situation that I’m very pleased to see being challenged by writers like SF Said.
I am a fan of Said’s previous work, and in Varjak Paw he challenged what publishers would normally perceive to be fashionable and created a book that seemed to have a genre all of its own. We waited a while for his new book – Phoenix – but it’s worth the wait and again he’s kicking against the genres. Phoenix  is highly accomplished Science Fiction (although I believe that Said prefers the term Space Fiction, and it is indeed set in deep space) and it is an explosive quest story that is riveting to the end. We are swept away with the most extraordinary characters and Said manages to keep them completely real and believable at all times, no matter how wild the adventure gets. We genuinely bond with them, and feel as if we are part of the crew travelling into a mysterious galaxy in search of Lucky’s absent father.

As with Varjak Paw, Said’s text is supported by Dave McKean’s glorious inky outpourings. These never clash with the text or reveal too much, but rather act as a teaser for the imagination. They give the book a subtle graphic novel quality, without ever overwhelming the text. It is clear that McKean and Said have an almost symbiotic relationship because the text and illustrations work so well together. The book is a beautiful package of wonderful writing combined with fantastic images and everything comes together to make a book that would definitely convert any non-sci-fi reader.

Here’s hoping that publishers will sit up and notice and take greater risks when commissioning, so that young readers can once again have access to more Science Fiction of this quality.


Return to REVIEWS HOMEPAGE
Posted by Dawn McLachlan at 09:00 Permalink

It sounds absolutely wonderful, and different fro anything I've read for a long time. I must get hold of a copy. Thank you, Dawn.

PS I have now bought it, and look forward to reading it over next weekend. Many thanks for the suggestion!