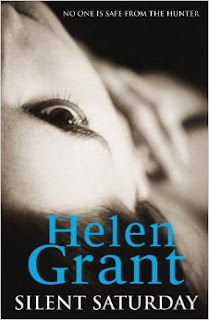 The bells are not ringing in seven year old Veerle de Keyser's Flemish village. It's Silent Saturday, the only day of the year when the church bells don't ring, and she's running away from an argument at home. She creeps into the church next door and is dared to climb the tower by schoolmate Kris Verstraeten. From there, they see the most horrific sight - a blood-drenched killer, exulting over the body of a child. Veerle starts screaming.

Fast forward ten years and Veerle doesn't think about that day much. She's too busy trying to cope with her anxiety-ridden mother, whose obsession with everything Veerle does is both oppressive and suffocating. So when she meets Kris again, and he invites her to join a secret group called the Koekoeken, she doesn't need much tempting. Exploring unoccupied properties gives her the kind of rush she hasn't felt for years and the fact that it's illegal only raises the thrill factor. But there's a killer on the loose: someone is stalking the Koekoeken, picking them off one by one. He is The Hunter and it's only a matter of time before he turns his attention to Veerle and Kris...

Silent Saturday is the first in the Forbidden Spaces trilogy, aimed at teens (and adults - oh yes, adults) aged 14+. It had me hooked from the very start - Helen Grant's prose is beautifully spare, not a word wasted but still deliciously elegant and descriptive. For example, when she first introduces Kris, she writes:

'The local telephone directory was full of Verstraetens but everyone knew who you meant if you talked about those ones...'

which sums his black sheep background up perfectly. He's exactly the kind of character I love: mysterious, brooding, daring and flawed. He brings out the best and the worst in Veerle, with whom I had huge sympathy and liked very much too, as she struggles against her mother's tightening cocoon. Kris and Veerle make some very bad choices but they are always logical, always plausible, even if I was willing them not to do some of the things they do. And the killer made my skin crawl - a truly terrifying monster.

I originally wanted to review all three books in the trilogy - The Demons of Ghent and Urban Legends are both just as thrilling and make the kind of breathtaking journey I wanted to begin again the moment I'd finished. But I couldn't review all three without spoiling the first and so I've settle on Silent Saturday as a taste for the other books. They are all equally brilliant. I especially enjoyed knowing that there were two more books to come - quite often, I don't want to reach the end of a story because I don't want my time with those characters to end. With Silent Saturday, I found myself gobbling up the pages, desperate to know what happened next, with the delicious safety net of knowing there was more to come. I read Urban Legends with a kind of sadness, unwilling to say goodbye to its characters. But the moment I picked up Silent Saturday to write this review I was hooked again, so I know I'll be revisiting them, admiring the unusual settings that made me want to visit Belgium and no doubt shivering with fear all over again. And of course I'll be recommending these books to everyone over the age of fourteen - although I don't like to stipulate an age normally, there are a lot of exquisitely described but by their very nature quite graphic crimes in the books which I feel makes them unsuitable for younger teens.

The Forbidden Spaces trilogy is published by Random House.

Tamsyn Murray writes for all age ranges, from picture books to teens. Her latest book is Completely Cassidy: Star Reporter and her website is tamsynmurray.co.uk


Return to REVIEWS HOMEPAGE
Posted by Tamsyn Murray at 09:47 Permalink