THE RIVER SINGERS by Tom Moorhouse; reviewed by Gillian Philip 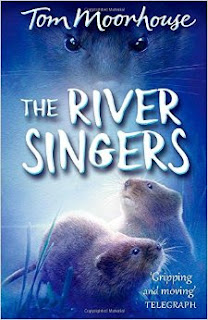 Tom Moorhouse works as an ecologist at the Zoology Department of Oxford University. I didn't know that till the end of this book, but in hindsight – well, of course that makes sense. There are many enchantments in this book, but the author's love for, and knowledge of, his subject is one of the standouts.

Animal fantasy can't help but be anthropomorphic; it's part of the deal. And despite the usual negative connotations of the word, it's not a bad thing. The fun lies in engaging a human reader by merging human emotions, outlooks and motivations with animal ones; the trick is avoiding sentimentality. Good animal fantasy, paradoxically, keeps it real. Tom Moorhouse pulls it off – and how.

As the story begins, young water vole Sylvan – who until now has known only his home burrow and the company of his mother, brother and two sisters – has only just been introduced to the big wide world. We see this new world as he does: a place of excitement, beauty and constant peril. The vole's-eye view of the narrative is consistent and utterly convincing, and the descriptive passages are beautiful. There's real magic in the song of the Great River, Sinethis – part natural environment, part life-spirit and part god. But the everyday pleasures and dangers of life as a small and vulnerable herbivore are about to be eclipsed by a new and alien horror – one that will shatter the young voles' world.

Sylvan himself is a terrific hero, adventurous and determined. It's the lot of voles to be a "sacrifice": at the mercy of the very river that sustains their lives, and victims of a multitude of predators. But when a mink destroys their lives, and it falls to young Sylvan to lead his family to a new home, he does it with a dogged courage and loyalty that would make any young reader fall in love with him (not to mention this older one). The young voles' adventures are heart-stopping, and the pace is lickety-split, but never at the cost of vivid portrayals of either the countryside or the characters.

The four vole siblings are distinct characters, and their interactions and relationships are a delight. There's plenty of banter and bickering that would be familiar to human brothers and sisters, but there's also real, deep affection and protectiveness. The supporting cast are no less entertainingly drawn: Fodur the rat is a star as soon as he appears. And the adult female water voles – the ones who establish territory, and hang grimly onto it in the face of not just predators but bitchy encroaching neighbours – are a hoot. Mistresses Valera, Lily and Marjoram are formidable matriarchs, with more a touch of the Mapp & Lucias. They're quite as terrifying as any heron, fox or king rat, but they're far funnier.

A lovely addition, and an integral part of the story, are the illustrations by Simon Mendez. The text is generously interspersed with drawings that evoke all the excitement, atmosphere and beauty of the riverbank, marsh and forest.

This is a story of family, courage and survival: of fighting on and maintaining hope in the face of despair. It has all the humanity a young reader could ask for, but told in the form and being and voice of water voles.  I was with these courageous little herbivores all the way, and I know a whole lot more about them now than I did before. Whether child or adult: if you hanker nostalgically for the immersive animal adventure of Watership Down, you'll be overjoyed to discover The River Singers. 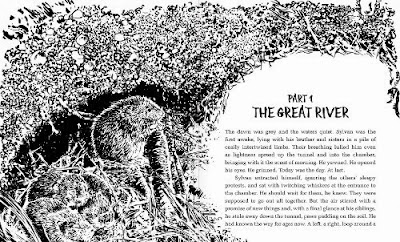 
Return to REVIEWS HOMEPAGE
Posted by Gillian Philip at 01:47 Permalink

It sounds - and looks - lovely!